Bitcoin has made higher lows and higher highs, creating a rising wedge formation visible on the 1-hour chart. Price is testing the resistance at the moment, thinking of whether to make a bounce or a break. A bounce could take it back down to support around the $1230 area, which is close to the 200 SMA dynamic support.

The 100 SMA recently held as a dynamic inflection point and could continue to do so. This short-term moving average is above the longer-term 200 SMA so the path of least resistance is to the upside. In other words, an upside wedge breakout could be more possible than a downside one. Besides, the gap between the moving averages is widening to reflect stronger buying pressure.

Stochastic is indicating overbought conditions, though, so a selloff could be due. RSI is heading north so suggest that there’s still some upside pressure in place but the oscillator is also approaching the overbought area. A breakout in either direction could mean around $100 in gains or losses as this is the same height as the wedge pattern. 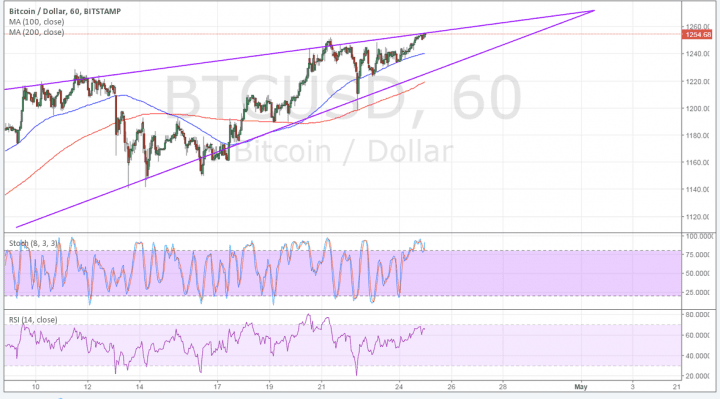 The main event for bitcoin against the dollar could be the tax reform announcement by US President Trump this week. Many had been counting on this tax reform promise since the elections as most of the rallies in equities had been spurred by this expectation. With that, the chance for disappointment is high because market participants have their expectations up there.

In that case, bitcoin could make an upside breakout if the dollar sells off or if risk aversion picks up on a slide in equities. On the other hand, an impressive announcement could spur a dollar rally enough to trigger a test of the BTCUSD wedge support or even a break lower. Keep in mind that traders are looking for more details on tax cuts and are also hoping to get confirmation that the changes will be implemented before the end of the year.

Another event risk is the US advanced GDP release as a very weak reading could douse hopes of a Fed rate hike soon, possibly even derailing the central bank from its path to hiking thrice this year. On the other hand, an upside surprise could keep tightening hopes supported and allow the dollar to recover against bitcoin.