Bitcoin could see some profit-taking from here as it currently tests the record highs around $1300. This also lines up with the top of a short-term ascending channel.

If sellers take over, a pullback to the channel support around $1250 could take place before the climb resumes. This is also in line with an area of interest or former resistance that could hold as a floor and the 100 SMA.

Speaking of moving averages, the 100 SMA is above the longer-term 200 SMA so the path of least resistance is to the upside. However, the gap between the two seems to be narrowing so a downward crossover and return in selling pressure could happen sooner or later.

Also, stochastic is turning lower to indicate a pickup in selling pressure. RSI is also moving south from the overbought zone to show that sellers are taking over while buyers are taking a break, letting bitcoin price to follow suit. A break below the short-term channel bottom could lead to a test of the 200 SMA dynamic inflection point, which could still allow a bounce to happen and the climb to resume, but a break below this area could open the door for a test of the next major area of interest at $950-1000. 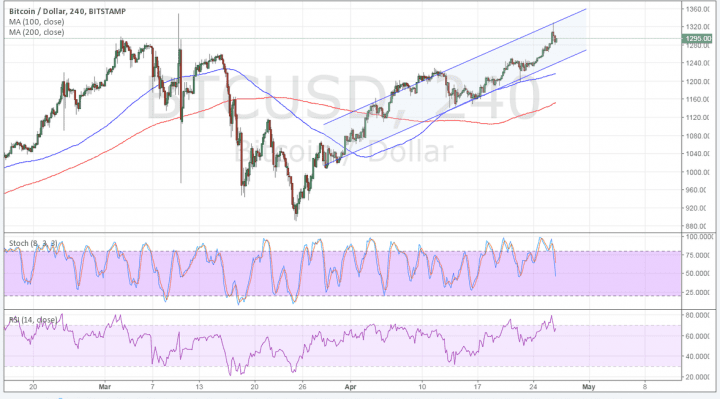 Traders appear to have been disappointed over the Trump tax reform announcement as it didn’t contain as much details as desired. Instead, the document merely confirmed speculations over the past few weeks and also didn’t indicate whether or not the changes can be enacted within the year.

Meanwhile, bitcoin continues to stay supported by political risks, particularly in the European region. Note that France is moving up to its second round of presidential elections and although the polls show a higher lead for Macron, the uncertainty still remains. Later on in the year, Germany will have its elections and the United Kingdom has snap elections as well.

Stronger bullish momentum for bitcoin could place it on track to break past the record highs and go for new ones past $1400 and onto $1500. Recent reports show that the SEC could give a second shot to the Winklevoss bitcoin ETF that would likely increase liquidity and interest in the cryptocurrency market. If so, it could also open the door for more bitcoin products to be regulated and boost their legitimacy.