Bitcoin is establishing new record highs and setting its sights higher, possibly aiming for the $1500 area. Price is now forming a new ascending channel on its daily time frame as it guns for the resistance, with technical indicators showing that there’s still some upside momentum left.

The 100 SMA is above the longer-term 200 SMA on the daily chart, indicating that the path of least resistance is to the upside. This suggests that the uptrend is more likely to continue than to reverse. Also, the gap between the moving averages is getting wider, which means that bullish momentum is getting stronger. The 100 SMA lines up with the channel support near $1100, adding to its strength as a floor in the event of a selloff.

Stochastic is indicating overbought conditions and looks ready to turn lower, possibly drawing sellers back in the game. Meanwhile, RSI is still moving up to show that buyers have enough energy to push for more gains. Still, this oscillator is also dipping into the overbought territory and turning lower could let bitcoin follow suit. Nearby support is located at $1200 or the mid-channel area of interest. 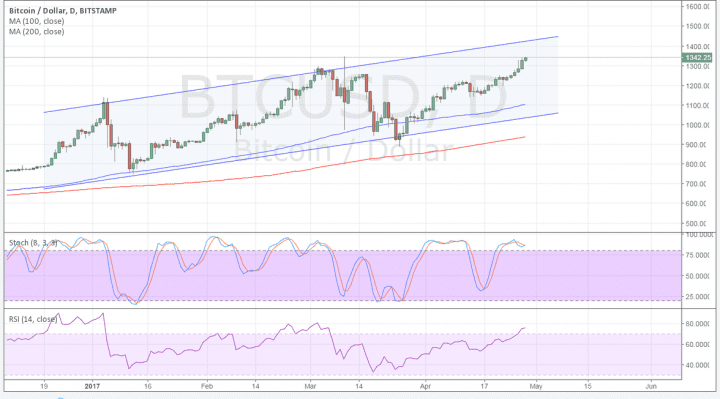 Bitcoin is currently drawing support from indications that the SEC might give the COIN ETF another chance. Earlier this year, anticipation for the SEC decision and the potential impact on market liquidity that approval could bring was one of the main supporting factors for the cryptocurrency. However, the regulator denied the request on grounds that bitcoin is traded in mostly unregulated markets that increase the risk of fraud and manipulation.

As for the dollar, disappointment over the Trump tax reform plan has led to losses in the past few days and the upcoming advance GDP release could result to more weakness. After all, analysts are expecting to see a 1.3% growth figure, lower than the previous 2.1% expansion. Weaker than expected data could even dampen Fed rate hike expectations for the rest of the year, adding to the downside pressure on the US currency.

To top it all off, prevailing geopolitical risks and political uncertainty in Europe continues to draw investors toward bitcoin as they pursue higher-yielding investments outside of traditional financial markets.