Bitcoin continues to trend higher and is moving inside an ascending channel on its 1-hour chart. Price just bounced off the top of the channel around $1160 and is pulling back to support near the $1115 area. Applying the Fibonacci retracement tool on the latest swing low and high shows that the 50% level coincides with the channel support.

Aside from that, the 100 SMA also lines up with the bottom of the ascending channel at the $1115 area, adding to its strength as support. A larger pullback could last until the 61.8% Fib at the $1100 major psychological level.

The 100 SMA is also above the longer-term 200 SMA on this chart so the path of least resistance is to the upside. This means that the uptrend is more likely to continue than to reverse. The gap is also sufficiently wide so no new crossovers are likely to happen soon.

However, stochastic is turning down from the overbought zone to show that buyers are exhausted and that sellers are about to take the upper hand. In that case, a break below the channel support could be possible and bitcoin could proceed to test the next support at the 200 SMA dynamic inflection point around $1075. RSI is also making its way down so bitcoin could follow suit. 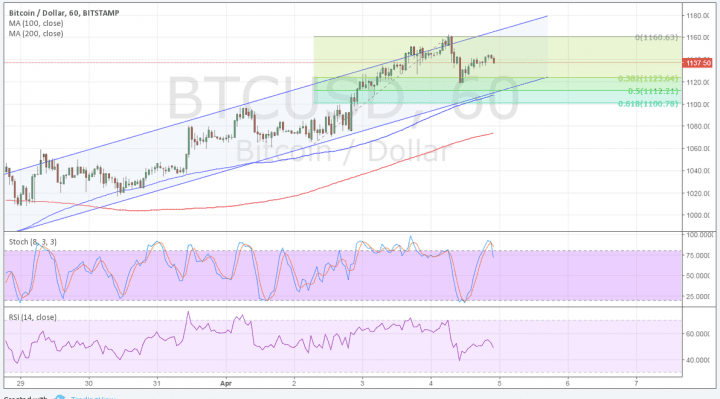 Demand for bitcoin has been revived after hard fork issues appear to have been resolved. Developers had a grand consensus to merge existing versions of the software by July 4, 2017 to prevent any incompatibilities. Aside from that, nodes and exchanges reported rejecting the newer version of the software or Bitcoin Unlimited and are favoring the older versions.

Also, persistent uncertainties in the global economy could continue to keep bitcoin supported as traders are always in search of higher-yielding alternatives in case stocks or commodities tumble. Risk aversion is still present in several regions such as in Europe with the upcoming elections and Brexit negotiations, in the US with the Trump administration, and in Asia where North Korea is reportedly conducting missile tests. The terrorist attack in Russia is also keeping risk-off flows in play.

Dollar volatility could pick up today, though, as the FOMC minutes will be released. This should provide more insight on how strong policymakers’ biases are for future rate hikes. Also, the ADP non-farm employment change is due, along with the ISM non-manufacturing PMI. Both are expected to hint at a slowdown in hiring, which could influence NFP expectations. However, if actual reports turn out stronger than expected, the US dollar could stage a strong rally on renewed tightening speculations.