Bitcoin price recently bounced off the 1-hour channel support as expected and is aiming for the resistance around the Fib extension levels. Price is already testing the 38.2% level and could still be due for a move up to the 61.8% to 76.4% levels closer to the top of the channel.

The 100 SMA is above the longer-term 200 SMA so the path of least resistance is to the upside. In other words, the uptrend is more likely to continue than to reverse. The gap between the moving averages has been pretty steady so bullish momentum can be maintained.

Stochastic is already dipping into the overbought zone, which suggests that bearish pressure could kick in soon as buyers are taking a break. RSI is also approaching the overbought area but has still room to head north so buyers could still have some energy to push bitcoin higher.

A break past the channel resistance could take bitcoin price up to the full extension close to the $1200 major psychological resistance, which is an area of interest on the longer-term charts. On the other hand, a return in selling pressure could still lead to a break below the channel support around $1130 and a potential reversal. 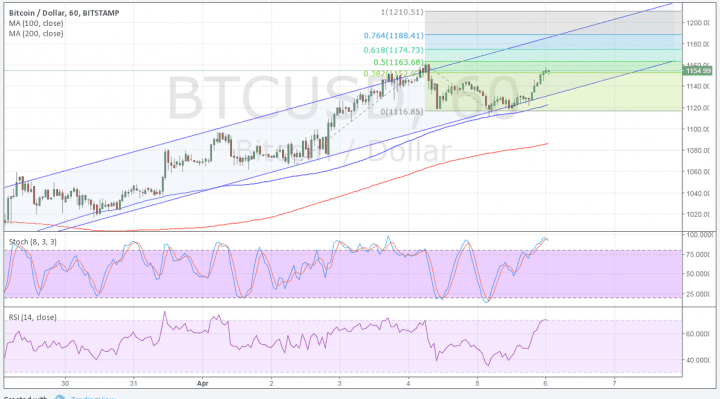 The odds are on bitcoin’s side at the moment as investors continue to reestablish their positions now that hard fork concerns are subsiding. Developers have agreed to merge existing versions of the software by July 4, eliminating potential incompatibility issues with exchanges or payment platforms and assuring that existing bitcoin will not lose their value.

Apart from that, the Japanese government’s decision to accept bitcoin as a legal form of payment is also encouraging for the cryptocurrency industry. This allowed bitcoin to rebound after seeing the SEC deny a couple of ETF applications on grounds that the cryptocurrency is largely unregulated in other markets and could be highly subject to fraud and manipulation.

Meanwhile, the dollar is losing ground as the Trump administration admitted that it could take longer to enact tax reform compared to the healthcare overhaul. This means that corporate tax cuts might not take into effect until next year at the earliest, causing Wall Street to return some of its recent gains.

This sentiment was also echoed by the FOMC minutes, which also indicated that policymakers are considering adjusting the balance sheet by dumping their bond holdings. In effect, this would mop up excess liquidity from the Fed’s quantitative easing days, having an impact similar to hiking interest rates. In that case, it could lessen the potential rate hikes lined up for the year, especially if economic data shows signs of slowing down.