Bitcoin continues to climb in its ascending channel on the 1-hour chart and has reached the resistance as noted in the earlier article. Price could be due for another pullback from here and applying the Fib tool on the latest swing high and low shows the potential correction levels.

The 61.8% Fibonacci retracement level seems closest to the channel support at the $1150 minor psychological level. This is also near the 100 SMA dynamic support, which adds to its strength as a floor. The 100 SMA is above the longer-term 200 SMA so the path of least resistance is to the upside.

The gap between the moving averages is also widening to show that bullish pressure is getting stronger and that there are now hints of a reversal just yet. If buyers are excited to push bitcoin back up, it could find support at the 38.2% Fib around the middle of the channel and a former short-term resistance. Stronger buying pressure could even trigger a break past the channel resistance at $1200.

Stochastic is turning down from the overbought zone to signal that buyers are taking a quick break and allowing sellers to take over. This could keep the corrective wave in play as RSI is also indicating overbought conditions and could be ready to move south. 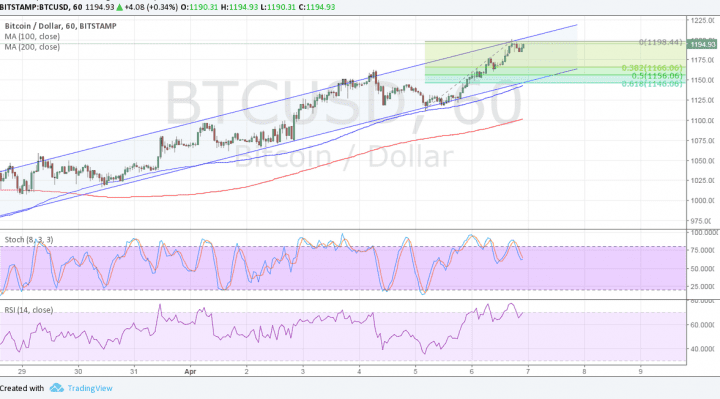 Dollar demand continues to weaken on lower hopes of tax reform within the year, which might possibly affect Fed policy biases. An event risk for BTCUSD today is the upcoming NFP release, which is slated to print a 174K gain in hiring, slower than the previous pickup. However, the ADP non-farm employment change figure turned out much stronger than expected and indicated an upward revision in previous data so the NFP could see an upside surprise.

On the other hand, ISM surveys indicated declines in the employment components so there may be signs of a slowdown in the labor market for March. Also, the Challenger job cuts report showed a 17% increase in March to reflect a pickup in joblessness. Stronger than expected NFP gains could renew dollar demand and keep bitcoin in correction while downbeat data could spur another jump.

Another factor that’s currently supporting bitcoin is the presence of geopolitical risks. Reports on the chemical bomb attack in Syria have already dampened demand for riskier assets and put traders on edge, and the news that the US launched a military airstrike in response has contributed to more jitters.