Bitcoin seems to be done with a shallow correction and could be looking at more upside from here. Using the Fib extension tool indicates the next potential upside targets.

The 100 SMA is safely above the longer-term 200 SMA on the 1-hour time frame, indicating that the path of least resistance is to the upside. The gap is narrowing, however, to signal weaker bullish momentum and a potential downward crossover that might draw sellers in.

So far, the 100 SMA is also holding up as dynamic support but a break below this level could be an early signal that sellers are regaining the upper hand, possibly sending bitcoin to the 200 SMA dynamic support at $3200.

Stochastic is heading down so bitcoin might follow suit as selling momentum is present. RSI appears to be edging slowly higher so bulls could still put up a fight. 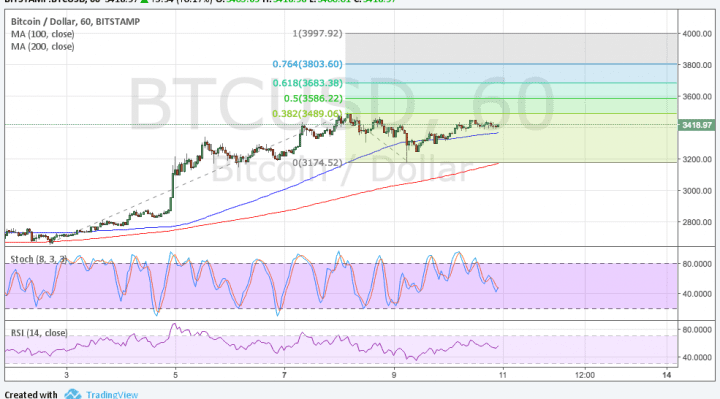 Bitcoin recently made a strong upside break from a long-term resistance level as the cryptocurrency appears to have survived the hard fork unscathed. The upgrade also allowed the network to handle more transactions than usual, which renders bitcoin superior against its cryptocurrency competition.

As for the US dollar, worsening conflict with North Korea could keep US traders worried and on the hunt for alternative holdings as stocks are falling. Downbeat producer prices data also weighed on CPI expectations and therefore Fed rate hike odds for September.

If this situation persists, bitcoin could be poised for another leg higher as traders dump dollars in the coming days. Bear in mind that North Korea has threatened to strike Guam and has previously expressed their intention to target parts of the US mainland as well. A lot could happen over the weekend so any changes in market sentiment could lead to volatile moves or gaps.