Bitcoin has once again hit new record highs past the $4000 mark as it embarked on a steeper climb. However, price is once again stalling at the major psychological level and may be due for a correction before scoring more gains.

Applying the Fibonacci retracement tool on the latest swing low and high shows that the 38.2% level lines up with the shorter-term ascending trend line around $3800 while the 61.8% Fib is closer to the longer-term rising trend line at $3564.

The 100 SMA is above the longer-term 200 SMA so the path of least resistance is to the upside. The gap is even widening to reflect stronger bullish momentum. A large correction could also draw support from the 100 SMA dynamic inflection point around $3200 and the line in the sand for the climb might be at the 200 SMA at $2800.

Stochastic is heading down, which means that bulls are exhausted from the recent climb and that profit-taking could be underway. RSI is also gearing up to turn lower to reflect a pickup in selling pressure. If buyers soon get back in the game, bitcoin could pop back up to the latest highs near $4200 or create new ones. 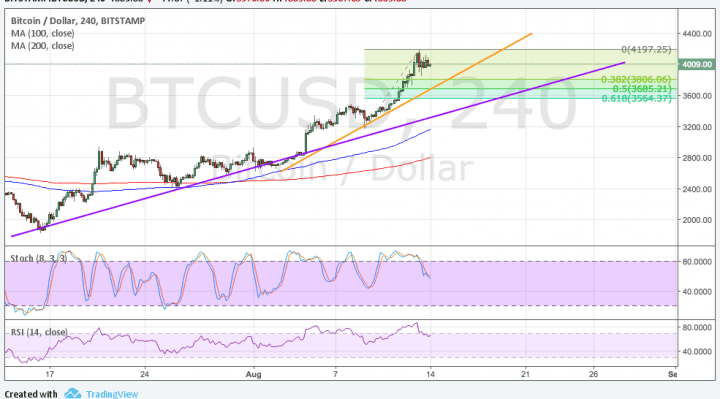 There have been several positive updates in the bitcoin industry so far, including several successful funding rounds for the likes of Coinbase and Filecoin. Investors are renewing their confidence in the cryptocurrency that has been upgraded to handle more transactions in its network. With that, demand has surged significantly Japan, which accounts for nearly half of bitcoin trades in the world.

Geopolitical risk in Asia and the US also support more bitcoin gains. During these scenarios, traders typically search for higher returns in assets not affected by these risks, unlike stocks and commodities. At the same time, dollar demand is weakening due to the ongoing threats from North Korea. Fed rate hike speculations are also weaker due to downbeat CPI readings released on Friday.