Bitcoin is starting to trend lower, moving inside a short-term descending channel visible on its 15-minute chart. Price is currently testing the resistance around $4320 and may be due for a drop back to support.

This resistance lines up with a former support level and the 61.8% Fibonacci retracement. It is also around the moving averages dynamic inflection points, which add to its strength as a ceiling. The 100 SMA is below the longer-term 200 SMA so the path of least resistance is to the downside. If the selloff resumes, bitcoin could drop back to support around $4150.

Stochastic is pointing down to confirm that sellers are on top of their game. However, the oscillator is already dipping into oversold territory to reflect exhaustion among sellers. In that case, bulls could still take over and spur a break past the channel resistance to start a reversal.

RSI, on the other hand, is just making its way down from the overbought territory. If it keeps dropping, bitcoin could follow suit and even attempt to break below the channel support to trigger a steeper selloff. 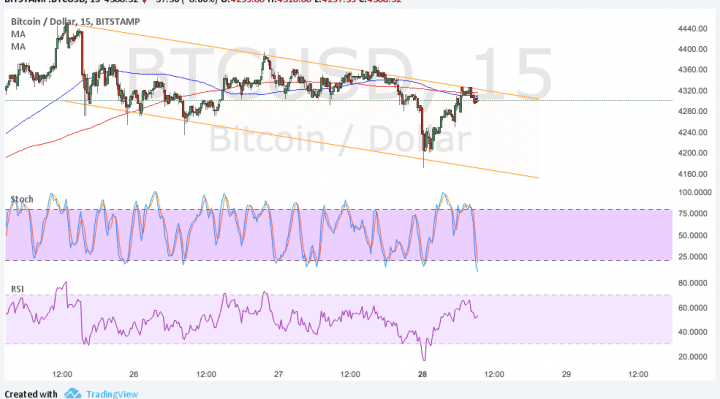 Bitcoin has recovered from its selloff following the resurgence of rival bitcoin cash as the latter reportedly enjoyed rising mining power and investor interest due to its ability to generate blocks 1-2 minutes faster than the core version. The upgrade to SegWit has allowed bitcoin to bounce but it looks like the rally is running out of steam again.

However, weakening dollar demand could still allow BTCUSD to advance as traders face the possibility of not seeing another interest rate hike from the Fed this year. The upcoming NFP report has a lot of high hopes pinned on it so a disappointing read could mean a sharp selloff for the US currency. This would be the last major piece of data before the next FOMC meeting, which means that it could have a strong say on market expectations and policymakers’ biases.