Bitcoin broke out of its previous consolidation pattern, sending clues on where it might be headed in the longer-term. Price broke to the upside of the symmetrical triangle formation and could be poised for more gains.

Price seems to be stalling around $975 at this point so a pullback could be due before it heads further north. Applying the Fib tool on the breakout move shows that the 38.2% level lines up with $950 and an area of interest. A larger pullback could make it to the broken triangle resistance, which might now hold as support.

The 100 SMA completed its crossover above the longer-term 200 SMA so the path of least resistance is to the upside. Also, the gap between the moving averages is widening, which means that buying momentum is getting stronger. The moving averages around the $910-920 area could be the line in the sand for a correction, as a break below this region could still spur a selloff. 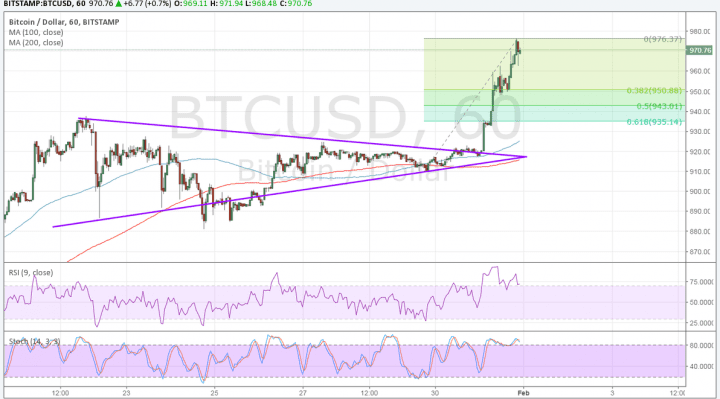 Stochastic is indicating overbought conditions so profit-taking could happen from here. RSI is also turning lower to suggest that sellers might take control of price action from here. If any of the nearby support areas hold, bitcoin could make it back up to the swing high or even up to the $1000 level.

Dollar weakness is seen as the main culprit for the breakout, as Trump’s calling out of Japan and China for currency devaluation seems to have backfired on the US currency. According to the US President, these nations have been using money market manipulation tactics to get jobs and companies away from the United States. However, market analysts speculated that this may be a form of jawboning on the dollar itself.

Either way, the focus has shifted away from China’s investigations on bitcoin exchanges and onto the potential currency war between nations. Additional geopolitical conflict stemming from Trump’s Muslim immigration ban has also dampened demand for the dollar and shored up buying of alternative assets like bitcoin.

Moving forward, more headlines of similar nature could push the dollar lower against bitcoin price, possibly even bringing BTCUSD up to the $1100 area. However, news of additional regulation in China when it comes to bitcoin trading could still turn the tide. Data from China has been slightly weaker, as the official manufacturing PMI dipped from 51.4 to 51.3 although the non-manufacturing component rose from 54.5 to 54.6.

Up ahead, the FOMC statement could also revive demand for the dollar if the US central bank sticks to its timeline of hiking rates three times this year. Any indication that they’re turning more hawkish due to expectations of fiscal stimulus and stronger growth could force bitcoin to return its wins to the dollar. The NFP report is also worth watching since this could provide a backdrop for the Fed’s policy plans.