Bitcoin sold off sharply in recent trading, breaking below several key support areas in one go. This breakdown is seen to have been spurred by more moves from Chinese authorities to crack down on bitcoin trading in the mainland, prompting its two largest exchanges Huobi and OKCoin to halt withdrawals.

Traders rushed to liquidate their positions on other exchanges for fear of having their funds locked up as well. For now, markets are waiting on an announcement from the third largest Chinese bitcoin exchange, BTCC, to see how far regulatory action has gone. China is the world’s largest bitcoin market and these top exchanges comprise nearly a third of overall volumes in the country, which means that any changes are significant for the entire industry.

Over in the US, Trump started dropping hints about his administration’s tax reform plan, mentioning that they are set to announce something in the next 2-3 weeks. This revived expectations for a large corporate tax cut, which would benefit US companies, and lower tax burdens on middle-class Americans that would spur spending. Apart from that, Trump’s meeting with executives from US airline companies seem to have produced positive results for jobs and fares. 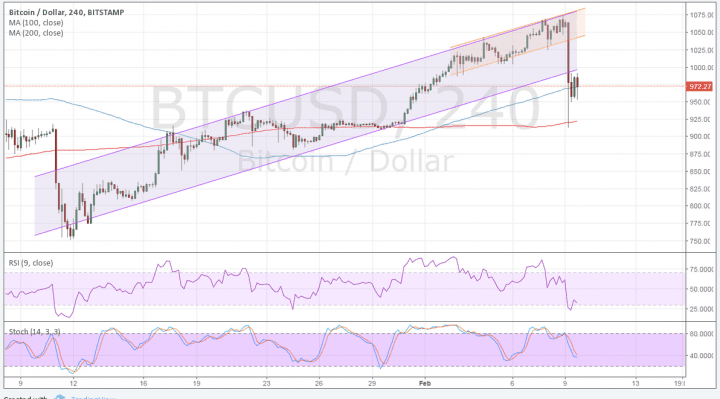 BTCUSD has broken below the short-term ascending channel support around $1030 and has also proceeded to crash below the longer-term channel bottom at $1000 as well. This represents a significant area of interest so the breakdown is ominous of more losses to come.

Stochastic is heading south from the overbought zone so BTCUSD could keep heading lower as selling pressure stays in play. RSI is also moving down but is already dipping into the oversold region so a return in buying momentum might be seen. If so, bitcoin could still pull up to the broken channel support or the $1000 level before resuming its drop.

The 100 SMA is still above the longer-term 200 SMA on this chart so the path of least resistance is to the upside. Apart from that, the 200 SMA appears to have held as dynamic support on the spike down and price is hovering at the 100 SMA dynamic inflection point. These moving averages are the line in the sand for the uptrend since mid-January so a move below the $900 area could be enough to confirm that a reversal is due, possibly taking bitcoin price to the lows near $700.

On the other hand, a return in buying momentum could push bitcoin back inside the channel and pave the way for a test of the $1075 resistance. However, market sentiment seems to be strongly against the bulls these days as Chinese regulators might not be done with their efforts to curb bitcoin activity. To top it off, expectations of stronger US growth on the heels of positive economic momentum and fiscal policy changes from the Trump administration could wind up restoring strong demand for the US currency.