Bitcoin was previously trading inside an ascending channel formation on the 4-hour time frame before making a break below support on more regulatory action in China. Price has since pulled up from its dive and seems to be finding resistance at the broken channel support at $1015.

This lines up with the 61.8% Fibonacci retracement level, which seems to be the line in the sand for this reversal correction. Once price heads back to its swing low at $912 or lower, the downtrend could gain more traction. In that case, bitcoin could test the support at the $900 major psychological level next.

The 100 SMA is still above the longer-term 200 SMA on this time frame, which means that the path of least resistance is still to the upside. Also, the gap between the moving averages is getting wider, which means that bullish pressure could still get stronger. In that case, the downside break could prove to be a fakeout and price could resume its climb back to the channel resistance around $1075 or higher.

Stochastic is heading south from the overbought zone so bitcoin could follow suit while sellers stay in control of price action. RSI is heading up though, so buyers aren’t completely out of the game yet. For now, the 200 SMA appears to have held as dynamic support on the spike down and price is testing the inflection point at the 100 SMA. 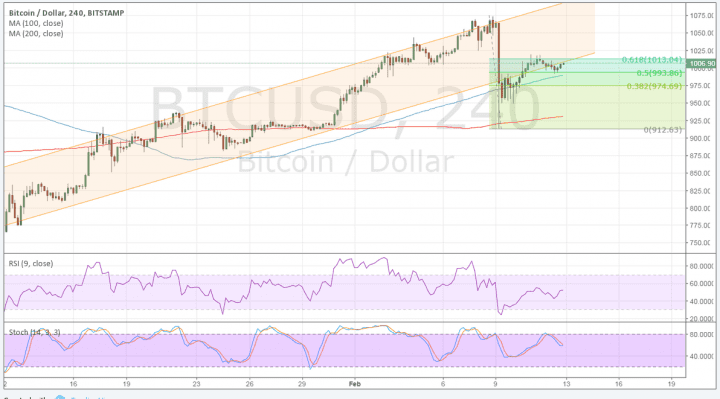 Late last week, a couple of top bitcoin exchanges in China announced that they would halt client withdrawals for a certain period of time as the government continues to crack down on money laundering activity. Prior to this, some firms already ceased offering bitcoin margin accounts to reduce risk and also introduced higher transaction fees on bitcoin trades to discourage excessive betting.

However, bitcoin soon made a recovery back above $1000 when Chinese authorities appeared to pause from their investigations. Just recently, they had a meeting with owners of the top exchanges in the mainland, which comprise majority of bitcoin volumes in the country. Note that China is the world’s largest bitcoin market so any industry changes in the area could affect global performance.

Another factor that’s preventing BTCUSD from sustaining its climb is renewed dollar strength in anticipation of more details on Trump’s proposed tax reform. Recall that he had been campaigning about reducing corporate taxes and deregulating the financial sector, both of which could be positive for companies, jobs, and overall economic growth. This could prompt the Fed to hike interest rates again in March, thereby driving up demand for US securities and the currency.

Geopolitical tension also subsided after Trump’s meeting with Abe, leading many to speculate that their decisions could prove mutual for both economies. With that, risk aversion could favor the dollar or the yen instead of sending traders back to the higher-yielding and riskier bitcoin.