Bitcoin continues to trend lower after recently breaking below a key support zone on the ongoing Chinese government crackdown. Price has since pulled back to retest the broken 4-hour channel support and is now establishing its downtrend channel on the 1-hour time frame.

BTCUSD is now testing the channel resistance close to the $1000 level and appears to be headed back south to the channel bottom at $975. The 100 SMA is below the 200 SMA to indicate that the path of least resistance is to the downside, which simply means that the downtrend is more likely to resume than reverse, and is holding as a dynamic inflection point for the time being. Also, the gap between the moving averages is getting wider, reflecting stronger bearish momentum.

If selling pressure is strong enough, bears could even push for a downside break of the channel support and a steeper drop to the next major floor at $900. Stochastic is already turning lower to confirm that sellers are regaining the upper hand while RSI is treading on middle ground, barely offering any strong directional clues at the moment. 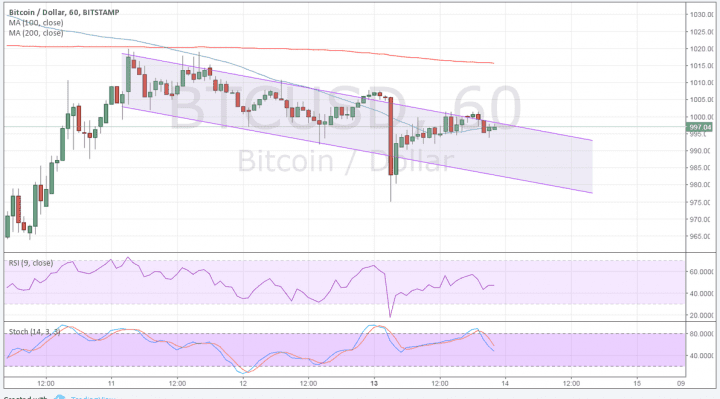 Earlier this month, a couple of major exchanges in China announced that they’d be halting withdrawals from bitcoin clients for a certain period of time to comply with government efforts to investigate money laundering activity. Prior to these, these exchanges already ceased offering margin accounts on bitcoin to reduce risk and introduced higher transactions costs to curb activity. This has led many traders to be on edge when it comes to government regulation, as authorities are also making an effort to reduce offshore investment and speculative yuan activity.

China accounts for majority of bitcoin transactions in the world and these top exchanges comprise nearly a third of overall cryptocurrency trading activity in the mainland. Additional restrictions could prompt another round of profit-taking, as traders fear that their accounts might be locked up as well or that penalties could be imposed for holding cryptocurrency.

Still, any signs that the government is done with its crackdown for the time being could prompt a relief rally if investors reestablish their long positions. This was the case at the beginning of the month before central bank officials reportedly had a closed-door meeting with CEOs of trading exchanges.

Increased demand for the US dollar has also dampened BTCUSD gains on subsiding geopolitical tensions stemming from the Trump administration. So far, his meetings with leaders from Japan and Canada have ended on a positive note and traders are still waiting to hear the details on his tax reform plan. Fed Chairperson Yellen also has a testimony lined up and if she affirms that they are gearing up to hike rates sooner rather than later, the dollar could enjoy an extra boost against bitcoin.