Bitcoin has formed higher lows and found resistance at $1020, creating an ascending triangle visible on its 1-hour time frame. Price is now testing support and might be due for a bounce or a break. The 100 SMA is below the longer-term 200 SMA so the path of least resistance is to the downside, which basically means that a downside move is more likely to take place than a rally.

However, the 100 SMA is also holding as dynamic support for the time being since it lines up with the bottom of the triangle around the $1000 major psychological support. The 200 SMA is closer to the triangle resistance and might keep gains in check. A downside break could send bitcoin price lower by $50 or so, which is roughly the same height as the triangle formation. Similarly, a break higher could send it up by $50 to $1070 or near its record highs.

RSI is on middle ground on the move down so there is some selling pressure present. Stochastic is also making its way lower so bitcoin might follow suit. But once the oscillators hit the oversold regions and turn higher, buyers could get back in the game. 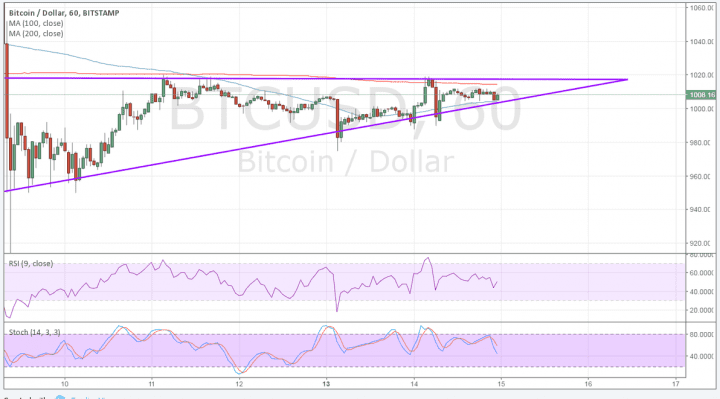 Market dynamics support the idea of further declines in BTCUSD, especially since bitcoin liquidity in China has been drained by government efforts to investigate anti-money laundering activity and is putting exchanges under the microscope. A couple of top bitcoin platforms in the mainland have temporarily halted client withdrawals while this is going on, prompting investors to cash out on their positions with other firms to prevent funds possibly being locked up.

In the meantime, the mood is a pretty cautious one as market watchers are waiting for new developments to unfold. It looks like regulators aren’t done with their efforts to curb bitcoin activity, even though exchanges have already ceased offering margin bitcoin accounts and imposed higher transaction fees. Relief rallies could be possible, similar to what we saw earlier in the month or late in January but new regulations from the Chinese government could easily undo these gains.

Demand for the dollar has also picked up in anticipation of strong US growth stemming from Trump’s tax reform plan, which he has promised to announce in the next two to three weeks. To add to that, Fed Chairperson Yellen has acknowledged the progress made in moving closer to full employment and 2% inflation, citing that an interest rate hike could be in the cards for their upcoming meeting. She also assured that tightening labor conditions could keep wages supported, which is positive for consumer spending and inflation. These views were underscored by Fed officials, including voting member Kaplan.

US retail sales data is due today, along with another speech by Yellen. Reiterating her hawkish bias could mean more gains for the dollar against bitcoin, especially if this is supported by upbeat consumer spending figures. As always, political headlines could also influence dollar price action throughout the week.