Bitcoin price was previously trading inside an ascending triangle formation and has made a break higher, signaling that further gains are in the cards. However price is still consolidating close to the triangle resistance so this could still prove to be a fakeout or the start of a rising wedge.

A sustained rally could take bitcoin back up to the highs near $1070 and beyond, but it would take a significant market catalyst to trigger such a move. So far, investors remain wary of potential regulations from China that might further curb trading activity in the mainland. As it is, a couple of exchanges have halted withdrawals to comply with government anti-money laundering investigations and this has taken its toll on market liquidity and confidence.

For now, the 100 SMA is below the longer-term 200 SMA on the 1-hour time frame so the path of least resistance is to the downside. This could take bitcoin price back down to the dynamic support around the moving averages or the $1000 major psychological level. Stronger selling pressure could push BTCUSD back down to the lows at $900-920.

RSI is indicating overbought conditions and could be turning lower, possibly drawing more sellers to the mix. Stochastic is also on the move down so bitcoin price might follow suit. 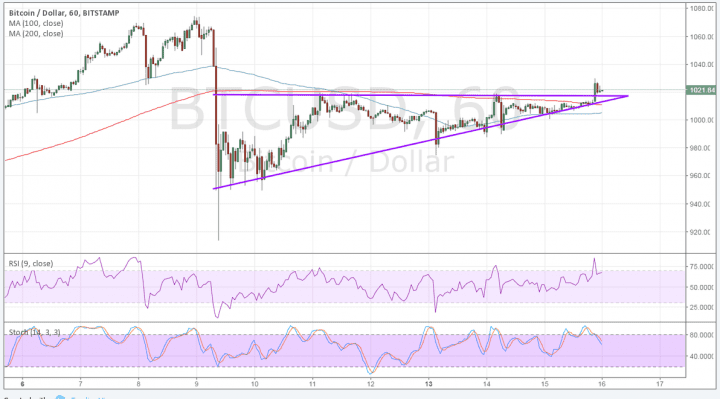 Liquidity remains low among bitcoin exchanges, particularly in China as investors are sitting on their hands and waiting for more news on the government’s bitcoin crackdown. So far this year, exchanges have been prompted to cease offering margin accounts, introduce higher transactions costs, and temporarily halt client withdrawals to comply with requirements and also support the government’s efforts to curb offshore investment and speculative yuan positioning.

BTCUSD is also being dragged down by dollar gains on expectations of a Fed rate hike in March and anticipation for Trump’s tax reform plan. This could keep selling pressure in play, especially if these expectations materialize and traders start seeing the positive effects on the US economy.

Still, other parts of the world are showing increased geopolitical risks and this might be enough to keep bitcoin price afloat. For one, rising bank troubles in Greece and Italy could revive demand for the alternative currency, something that has been seen when Greece imposed capital controls while grappling with bailout issues. The possibility of a Frexit or French exit from the EU could once again threaten the stability of the shared currency and encourage traders to put their funds in assets that offer higher returns or at least don’t lose value.

In the US, increased interest in bitcoin funds in Wall Street could also make up for the lost liquidity in China. However, this might not be enough to sustain similar rallies as in the past because China still remains the largest bitcoin market in the world. For now, market factors seem to be suggesting more consolidation unless concerns about regulation abate.