Bitcoin is setting its sights back up as it broke out of a short-term consolidation pattern and signaled that buyers are back in the game. Price might now aim for the ascending channel resistance visible on the 1-hour chart around $1100.

The 100 SMA is above the 200 SMA, which means that the uptrend is more likely to resume than to reverse. Price is forming what appears to be a flag or a bullish continuation pattern so a break past the spike up could confirm that buying pressure is picking up again. In addition, the 100 SMA coincides with the channel support near $1060 so it might keep holding even in another pullback.

RSI is indicating overbought conditions, though, so a bit of a selloff could be possible. Stochastic is also in the overbought area and is turning lower to reflect a pickup in selling momentum. If a downside break of the channel support happens, bitcoin could head to the next floor at the 200 SMA dynamic inflection point then onto the $1000 key psychological area of interest. 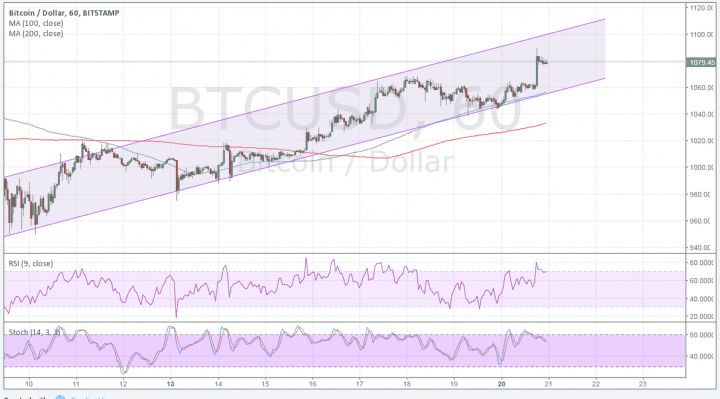 The spotlight seems to have turned away from the Chinese crackdown on bitcoin exchanges as there have been no major headlines on the issue so far. Latest updates involved a couple of exchanges halting withdrawals to cooperate with money laundering investigations but there have been no penalties or new regulations announced. Still, if this theme recurs, bitcoin price could be in for another tumble as investors rush to liquidate their holdings.

Uncertainties in Europe seem to be propping up bitcoin price these days as traders are anticipating another Greek fiasco involving capital controls. The last time the country had trouble securing bailout funds, the government restricted withdrawals and stock market trading so investors and individuals pursued other ways to move money around, mostly involving bitcoin and other digital currencies. This ramped up demand and led to price gains then.

Aside from that, French election updates are reminding market watchers of the potential instability in the region if Le Pen wins and a “Frexit” materializes. This could put the existence of the shared currency in jeopardy so European traders are slowly moving their money to bitcoin instead.

Over in the US, futures are suggesting a strong stock market performance this week, with a number of top retailers lining up to print their quarterly earnings figures. But instead of boosting demand for the dollar against bitcoin, this seems to be propping up the riskier and higher-yielding cryptocurrency as traders confidently pursue stronger returns.

In any case, the FOMC minutes due midweek could still be a catalyst for dollar gains if the transcript confirms that majority of policymakers are inclined to vote for a rate hike in March. Trump’s tax reform announcement, which could happen any day now, could also kick up demand for the dollar or at least cause some bitcoin volatility.