Bitcoin bounced off the ascending channel support and went all the way up to test the resistance around $1120. From there, price is showing signs of retreating from resistance and might be due for a pullback to the bottom once more.

Applying the Fibonacci retracement tool on the swing low and high on the 1-hour time frame shows that the 61.8% level coincides with the channel support around $1075. This is also in line with the 100 SMA dynamic support, which means that the confluence of inflection points around that area could be enough to keep losses in check.

RSI is heading south from the overbought zone to indicate that sellers are regaining the upper hand at this point, possibly triggering a quick correction from the ongoing uptrend. Similarly, stochastic is moving down so BTCUSD could follow suit and test support at any of the Fib levels.

A shallow correction could be indicative of strengthening bullish pressure and the mid-channel area of interest at $1090-1100 could be enough to let the climb resume. A sharp rise in buying momentum could soon spur a break past the channel resistance and swing high at $1125, setting off a steeper rally for bitcoin.

On the other hand, a return in selling pressure could lead to a break of the channel support and a move towards the 200 SMA dynamic inflection point around $1050 next. A break below this line in the sand could be enough confirmation that a downtrend is underway and that another test of the $1000 key level is in the cards. 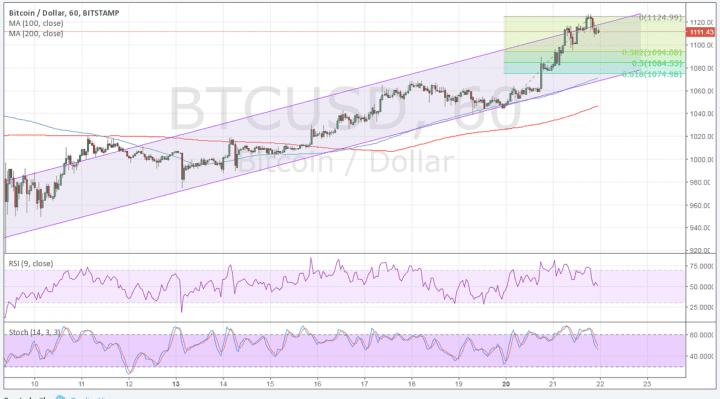 Bitcoin is enjoying a pickup in investor interest these days as geopolitical uncertainties and debt troubles in Europe are keeping traders on edge. Italian politics has been hogging the spotlight in the euro zone as the government is looking into bailouts but might have trouble enacting reforms with early elections set to happen. In France, the possibility of a national referendum on EU membership if Le Pen wins the elections is also convincing European traders to put their money elsewhere. To top it off, issues with Greece’s bailout funds are also keeping speculations of capital controls in play.

Risk appetite is also supporting the higher-yielding asset these days as investors seem to have moved on from reports of Chinese government investigations. There have been no penalties or regulations announced so far so traders in the mainland have been reestablishing their bitcoin holdings. In the US, investors are also keeping a close watch on the foreseen approval of the first bitcoin ETF by the SEC. If this pushes through, market liquidity would enjoy a significant boost as more individuals and institutions place their bets on bitcoin. On the other hand, industry setbacks could once again trigger a selloff for the cryptocurrency.