Bitcoin has been climbing the charts these days but signs of uptrend exhaustion are materializing. Price formed higher highs on its 1-hour time frame since February 21 but oscillators such as stochastic and RSI showed lower highs. Both oscillators are also heading lower, which confirms the pickup in selling pressure.

In that case, BTCUSD could head down to the next area of interest at $1120 before heading any further north. This lines up with the 50% Fib on the swing high and low on a short-term time frame such as the 15-minute chart. Once both oscillators hit the oversold areas and turn higher, buying pressure could return and boost bitcoin price back up to the highs at $1140 and beyond.

The 100 SMA is above the longer-term 200 SMA on the 1-hour chart, indicating that the path of least resistance is to the upside. The moving averages are far below the current bitcoin price, which means that bullish momentum is very strong. Still, any large corrections could draw support from these dynamic support area s as they line up with key levels such as $1080 and $1050. A break below these areas could put it back on track towards testing the $1000 major psychological support. 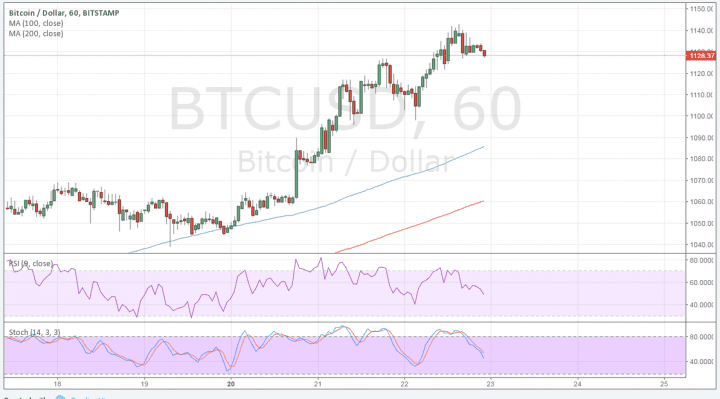 On longer-term time frames, bitcoin is still showing no signs of looking back from its climb, although there’s likely to be a point at which most bulls book their long positions as price is once again testing record highs. Taking the downside route offers a stronger return-on-risk, but a strong and convincing upside break seems to have no other barriers in sight.

Demand for the US dollar could pick up once more as the FOMC meeting minutes confirmed that some policymakers are open to the idea of hiking interest rates in March or even going for a faster pace of tightening than initially anticipated. Still, this hinges on how jobs and inflation data turns out ahead of the actual meeting. Also, some members are wary of potential downside risks from a stronger dollar.

In other parts of the globe, support for bitcoin remains intact, particularly in Europe where investors are on the lookout for more signs of financial unease in Greece and Italy. This could prompt the government to impose capital controls once more, forcing individuals to look for alternative payment and investment methods such as bitcoin.

Over in China, there haven’t been much headlines on government investigations or additional restrictions being implemented by exchanges. So far this year, a number have ceased offered margin accounts on the cryptocurrency while introducing higher transactions costs on bitcoin as well in order to curb activity and offshore investment. Soon after, the top exchanges halted client withdrawals to comply with the government crackdown on money laundering but there haven’t been any penalties announced since.