Bitcoin enjoyed another burst of bullish momentum, which was enough to take it to new all-time highs. Price is now trading past the $1200 level in anticipation of the bitcoin ETF approval in Wall Street. The SEC’s deadline is March 11 and approval of this COIN ETF from the Winklevoss brothers could significantly increase interest in and demand for bitcoin since it would be more accessible to institutions and individuals.

The 100 SMA is above the longer-term 200 SMA on the weekly time frame, confirming that the long-term path of least resistance is to the upside. The gap between the two moving averages is getting wider once more, indicating a pickup in bullish momentum. This could take bitcoin price all the way up to the next key level at $1300 and beyond, depending on how industry updates pan out.

So far, there still have been no major headlines on government regulation in China even after a number of exchanges halted client withdrawals to comply with money laundering investigations. Stricter regulation and harsh penalties on violators could once again wipe out liquidity in the region and lead to a flurry of profit-taking for bulls, which could trigger another much-needed correction for bitcoin. 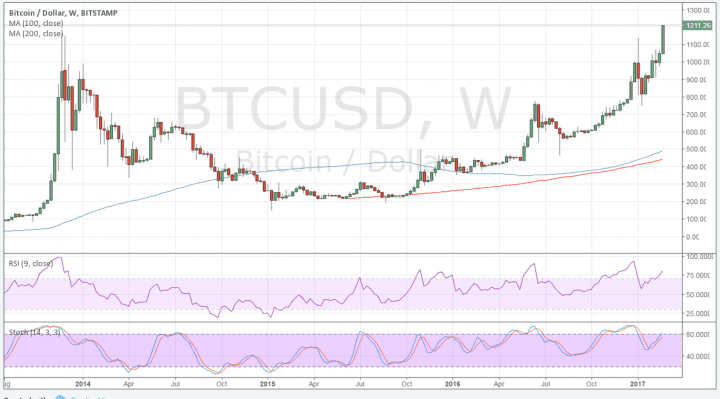 RSI is turning up, confirming that buyers are in control of price action at the moment. The indicator is closing in on the overbought zone to show weakening bullish pressure, which sellers might take advantage of once the oscillator heads back down. Stochastic is also pointing up for now, reflecting the presence of buyers in the market.

A pullback could last until the 1000.00 to 1100.00 levels, which have acted as support and resistance in the past and might have plenty of limit orders waiting. A larger correction could reach the 700.00-800.00 mark, which is another long-term area of interest.

Demand for the dollar has been subdued in the past few days as traders are still having doubts about the Fed rate hike in March and the Trump administration’s fiscal policy plans. For one, the FOMC minutes indicated that policymakers are keeping a March hike on the table only if upcoming jobs and inflation reports turn out strong or in line with their expectations. Meanwhile, Treasury Secretary Mnuchin remarked that government policy changes will take a year or two to kick in, downplaying Trump’s campaign promises of 4% economic growth.

Mnuchin also hinted that the government is in no rush to brand China as a currency manipulator, something that might put officials’ mind at ease and therefore convince them to scale back on their efforts to curb yuan speculation and offshore investments. In that case, bitcoin could enjoy even stronger demand as investors are no longer worried about their holdings. Then again, this sharp rally in bitcoin price could raise eyebrows among authorities once more and prompt them to step up their measures to restrict trading activity.