Bitcoin has climbed to record highs around the $1200 mark, which has served as a take-profit point last week. Price retreated upon testing that resistance and might be due for a larger pullback to the ascending channel support visible on the 4-hour chart.

The 100 SMA is above the longer-term 200 SMA so the path of least resistance is to the upside. In addition, the 100 SMA dynamic support is close to the channel bottom at $1080-1100, adding to its strength as a potential floor. It is also close to a former resistance area around $1050.

RSI is turning higher to reflect a pickup in buying pressure, which might be enough to keep the uptrend intact and might even push price beyond the latest highs and the channel resistance. If that happens, a steeper climb could take place and take BTCUSD up to the next area of interest at $1300. Stochastic has barely made it to the oversold region before turning right back up to reflect a return in buying momentum. 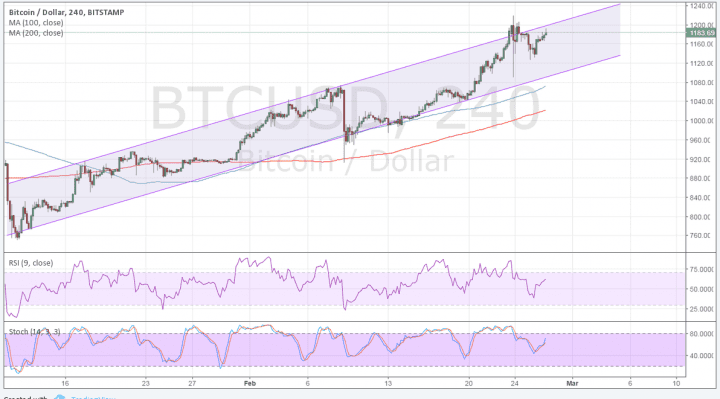 On the longer-term time frames, some signs of rally exhaustion are materializing. Reversal candlesticks can be seen on the weekly and daily charts, although succeeding candles have yet to give confirmation. Some divergences with oscillators are also noticeable, indicating that bearish pressure could take over soon and trigger a much-needed correction.

Rising geopolitical risks, particularly when it comes to the political landscape in Europe and debt standings, have buoyed bitcoin price higher in the past few weeks. Last week, the cryptocurrency got an additional boost from stronger expectations of the bitcoin ETF approval by the SEC sometime in March. If the Winklevoss twins’ COIN ETF gets the go signal, bitcoin could enjoy stronger market liquidity from new individuals and investors who have access to the fund, possibly even eclipsing the drop in activity in China.

Speaking of China, there hasn’t been much news on government regulation or any client penalties just yet so investors are breathing easy that the cryptocurrency can hold on to its gains from here. But as we’ve witnessed earlier this year, any major announcements concerning trading restrictions tend to have a huge bearish effect on the cryptocurrency. This explains why investors seem to be taking it easy from here, cautiously locking in some gains in case the strong pickup in price could attract the attention of authorities once more.

Other catalysts for BTCUSD action this week involve FOMC policymakers’ speeches as these could influence Fed rate hike expectations for March, the US preliminary GDP figure, and Trump’s tax plan announcement. The US President hasn’t specified a date during which he would unveil his plans but he did say two to three weeks a few days ago. If the changes are enough to spur another strong rally in US equities, the dollar could overtake bitcoin and possibly even trigger a break below the channel support. On the other hand, if the announcement fails to impress, bitcoin could take the upper hand and sustain its climb to even newer highs.