Bitcoin continues to trend higher and continues to trade close to the ascending channel resistance at $1040. Price could be due for a pullback from here, drawing more buyers to the mix before resuming its climb.

Applying the Fib tool on the latest swing high and low shows that the 61.8% level is closest to the channel support around $965. The 100 SMA just crossed above the longer-term 200 SMA on this time frame to confirm that the path of least resistance is to the upside. This means that the rally is more likely to carry on than to reverse.

Any of the Fibs could hold as well, with the 38.2% level lining up with a key are of interest near $1000 and holding as support in the past. A larger pullback could last until the line in the sand at the 200 SMA, which is close to $900. A break below this area could signal the start of a longer-term selloff.

RSI is turning lower so bitcoin price could follow suit as sellers take the upper hand. Stochastic is also moving lower to confirm that bearish momentum is in play. Once the oscillators hit the oversold area and turn higher, buyers could return to the game and push price back up to the swing high or beyond. 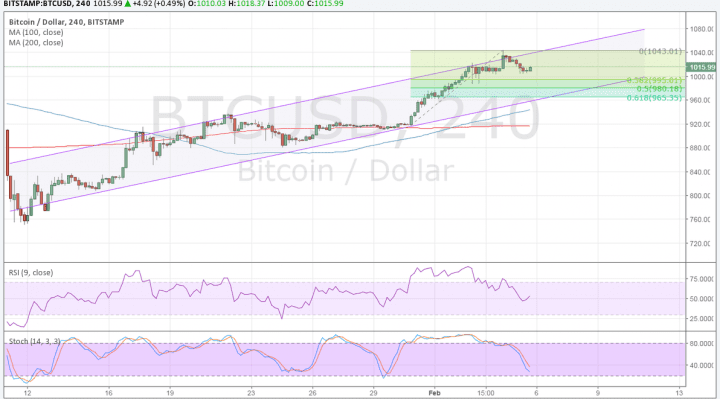 The US dollar gained some support from stronger than expected NFP data, which confirmed that the Fed is likely to push through with its tightening plans for the year. Market watchers are projecting a potential hike in March or in June, followed by another one in September or December.

However, risk appetite seems to be taking hold of BTCUSD action after US President Trump indicated that he will follow through on his plans to deregulate the financial sector. This could mean more profits for Wall Street and corporate America, on top of planned tax reform and increased infrastructure spending, which then boosts traders’ appetite for riskier assets like bitcoin.

Meanwhile, although data from China has turned out mixed, authorities seem to be showing no signs of worry so investors in the mainland are more relaxed about potential restrictions on bitcoin trading. Last month, bitcoin was weighed down by reports that officials are forcing exchanges to introduce restrictions and conducting investigations on clients. So far, it looks like these concerns are no longer making much of a dent on bitcoin action.

With that, BTCUSD could be on track towards testing its highs for the year and perhaps surging past the $1100 area if this risk sentiment keeps up. There’s no much in the way of top-tier economic data on the schedule for the week so all eyes and ears could be on Washington and the Trump administration’s actions. Any indication that risk aversion could return might draw traders back to the safe-haven US dollar.