Bitcoin broke out of its rising wedge formation to signal that bulls have regained the upper hand. This chart pattern is around $1800 tall so the resulting move could be of the same size. Price has already climbed by around $800 since the breakout so it might still be eyeing around $1000 in gains to the $5000 area.

The 100 SMA is above the longer-term 200 SMA so the path of least resistance is to the upside. In addition, the 100 SMA lines up with the wedge support at $3400, although the broken wedge resistance might be enough to hold as a near-term floor in the event of a pullback. A larger correction could last until the 200 SMA dynamic inflection poin t at $2750. 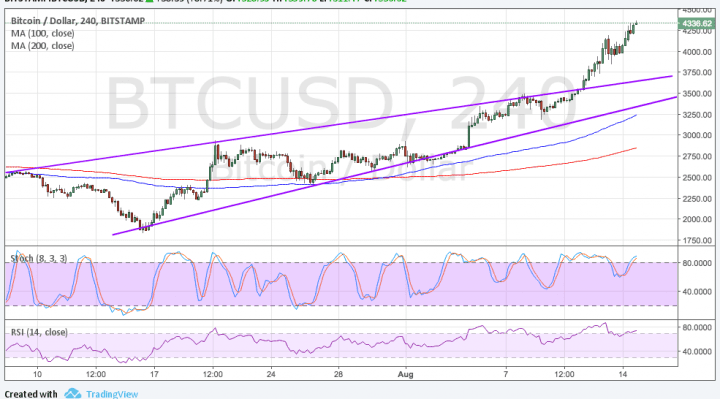 Prevailing tensions with North Korea are being blamed for the risk-off market moves, which have turned out bullish for bitcoin. After all, this cryptocurrency tends to be preferred by investors seeking high returns outside of traditional markets like stocks and commodities which are vulnerable to geopolitical risk.

At the same time, weak data from China has dampened the outlook for global demand so it’s understandable how investors moved their funds to bitcoin instead. Surging activity in Japan and Korea, which accounts for around half of bitcoin transactions in the world, has also propped price up.

Meanwhile, the dollar is reeling from downbeat CPI data released last Friday and is looking at the retail sales and FOMC minutes next. Another batch of downbeat results or cautious remarks from policymakers could weigh on the US currency versus bitcoin. Still, an announcement on balance sheet unwinding could allow it to stay afloat, along with easing concerns about the North Korean missile threat.