Bitcoin was moving above an ascending trend line and just bounced off support. Price is now heading up to the latest record highs as bullish pressure quickly returned on a test of the trend line and 100 SMA.

Speaking of moving averages, the 100 SMA is above the longer-term 200 SMA so the path of least resistance is to the upside. The gap between the moving averages is widening so bullish pressure is getting stronger.

Stochastic is pointing up to indicate that buyers are in control of price action. RSI is also heading north so bitcoin could follow suit. There’s enough room for RSI to climb before heading up to the overbought zone so bulls have more energy to push for new record highs. 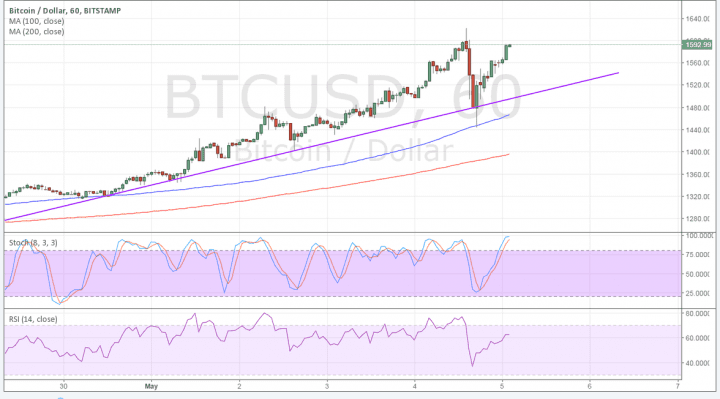 There are several factors keeping bitcoin supported at the moment. For one, anticipation is building up again for the SEC decision on the Winklevoss bitcoin ETF as the regulator opened the opportunity for the twins to submit more requirements until May 15. Note that their previous denial was based mostly on the fact that bitcoin is traded in largely unregulated markets, thereby having a large risk for fraud and manipulation, but there have been efforts to increase the legitimacy of the cryptocurrency.

In particular, the SEC noted that it “is disapproving this proposed rule change because it does not find the proposal to be consistent with Section 6(b)(5) of the Exchange Act, which requires, among other things, that the rules of a national securities exchange be designed to prevent fraudulent and manipulative acts and practices and to protect investors and the public interest” but could be due to reverse this decision.

One example of this is Japan’s decision to officially recognize bitcoin as a legal form of payment. This has led to a sharp increase in volumes and trading activity among exchanges in the country, which is also another factor lifting the cryptocurrency. Similar moves by regulators in other countries could also lead to increased market interest in bitcoin.

To top it off, surging bond yields in China are leading investors to react to concerns about tighter financial restrictions in most markets. This has led to a revived interest in bitcoin even as government authorities are also making moves to curb offshore investments and crack down on money laundering activity.