Bitcoin continues to climb and is approaching its all-time highs so it’s time to revisit the extension levels to see the next upside targets. Using the Fibonacci extension tool on the latest pullback on the daily time frame shows that price has breached the 38.2% level at $4200 and is closing in on the $4946.89 level at the 61.8% level.

If price is able to surge past that area, it could go for the 76.4% extension at $5402.76 then at the full extension just past the $6000 psychological resistance. The 100 SMA is above the longer-term 200 SMA so the path of least resistance is to the upside, which means that the rally is more likely to continue than to reverse.

The gap between the moving averages also seems to be widening to reflect stronger bullish pressure. RSI has room to climb before indicating overbought conditions so there’s some buying momentum left to take out the record highs and create new ones. However, stochastic is already turning lower from the overbought level to signal a return in selling pressure. 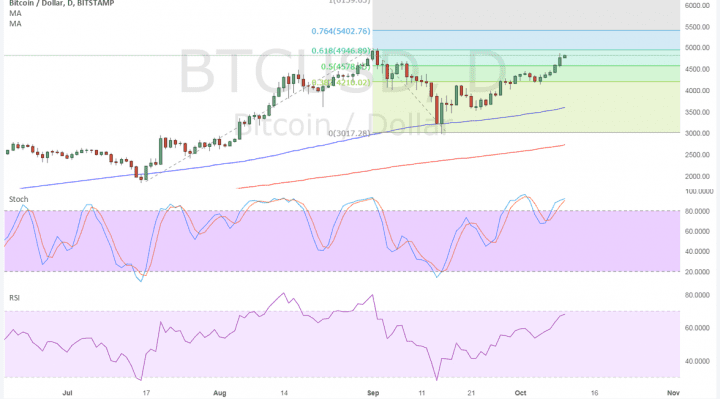 Bitcoin faces another potential fork in mid-November and traders appear to be positioning ahead of this event. If it goes without a hitch like it did back in August, the cryptocurrency could be in for another leg higher despite weaker trading volumes in the aftermath of China’s crackdown.

Meanwhile, the dollar might take its cues from the FOMC minutes and release of the CPI and retail sales figures this week. The NFP has disappointed with a 33K drop in hiring versus the estimated 88K gain but the pickup in wages has kept traders in a positive mood. Besides, a positive revision might also be made for the headline figure as the impact of the hurricanes is discounted.

US equities have dipped ahead of the earnings season and this may also be a good reason why traders are flocking back to bitcoin. The presence of geopolitical risk all over the globe is another factor, as Germany and New Zealand have yet to establish majority while the EU deals with the Catalonian independence bid.