Bitcoin broke below the neckline of a complex double top pattern to signal that bearish pressure is getting stronger. Price pulled up to this broken support zone then resumed its slide to confirm that sellers are ready to push price lower.

Using the Fibonacci extension tool on the pullback move shows the next potential downside targets. Price is currently testing the 50% extension for now but a lower move could last until the 61.8% extension at $2473 or until the full extension just above the $2400 support level.

However, stochastic is pulling up from the oversold region with a bit of  bullish divergence. Price made higher lows since July 8 while stochastic drew lower lows. RSI is also pointing up so bitcoin might follow suit and climb to the nearby inflection points at the moving averages.

Speaking of moving averages, the 100 SMA is still above the longer-term 200 SMA to signal that the path of least resistance is to the upside. However, the gap between the two is narrowing to hint at a potential downward crossover which might draw more sellers in. 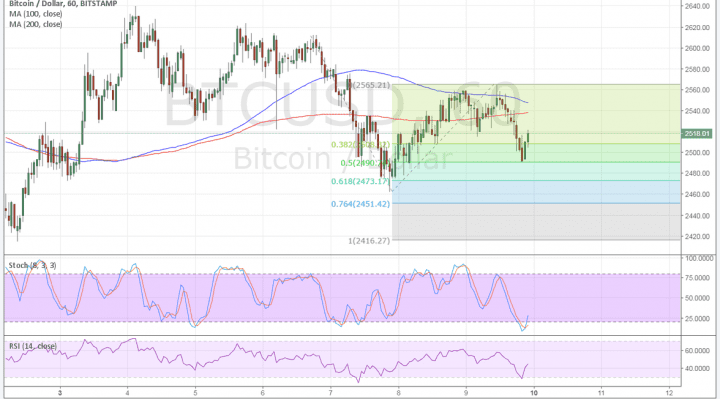 Bitcoin was already in recovery mode late last week after Goldman Sachs analyst Sheba Jafari mentioned that the cryptocurrency is in its fifth wave of gains and that it might be able to climb up to the $3615 area from here. Dollar weakness was in play back then as the FOMC minutes showed a divide among policymakers when it comes to future rate hikes and the timing of balance sheet reinvestment.

The dollar was able to get back on its feet on Friday after the NFP report printed a stronger than expected headline reading. Employment grew at 222K in June versus the projected 175K increase and the earlier 152K gain, which already enjoyed an upgrade from the initially reported 138K figure.

Moving forward, speeches from FOMC officials could continue to determine dollar behavior while bitcoin continues to hold out for bigger industry updates. So far there have been no market-moving ones, which explains the tight consolidation visible on longer-term charts.