Bitcoin price has been in selloff mode for the past few days so it’s time we take a look at long-term correction levels. Applying the Fib tool on the latest swing low and high on the daily chart shows that BTCUSD is approaching the 38.2% retracement level near $2200.

A bounce off this support could lead to a move back up to the swing high near $3000 or the creation of new all-time highs. However, it would take a strong market catalyst to ease fears of a bitcoin bubble and renew rallies. A larger pullback to the 50% Fib at the $2000 major psychological level is also a possibility, as this lines up with the 100 SMA dynamic support.

Speaking of moving averages, the 100 SMA is above the longer-term 200 SMA so the path of least resistance is still to the upside. An even deeper correction could draw support from the 61.8% Fib at $1714 or the 200 SMA dynamic inflection point near $1500. A break below that level could have the last line of defense at $1200 before steeper losses are seen. 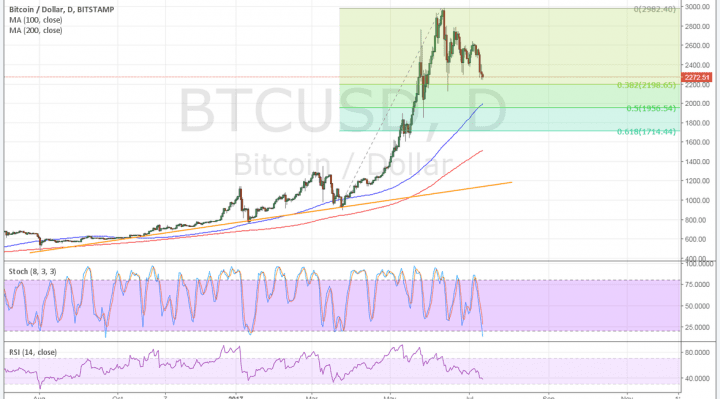 Stochastic is pointing down to confirm that sellers are in control of bitcoin price action. RSI is also moving south so bitcoin might follow suit. However, both oscillators are approaching oversold levels to indicate that bearish momentum is slowing and that buyers could regain control soon.

Several analysts had previously been pointing out that bitcoin is in a bubble, and the recent drop is leading many to think that this bubble is already bursting. Because of that, the selloff is exacerbated until positive industry news comes up. So far, many seem to be focused on how a hard fork could impact the network and transactions.

Meanwhile, the dollar has gained strong support from the upbeat June NFP report, which basically seals the deal for another Fed interest rate hike before the year ends. The Fed is also due to unwind its balance sheet holdings and this could lend more upside to the dollar. Also, the possibility of removing stimulus by other major central banks could also lead traders to lighten up on their bitcoin investments.