Bitcoin price is trending lower after breaking below a consolidation pattern and getting weighed down by bearish forecasts. Price just bounced off the descending channel support, though, and is in the middle of a correction to nearby resistance levels.

Using the Fib tool on the latest swing high and low on the 1-hour chart shows that price is currently testing the 50% level around $2400 and the 100 SMA dynamic inflection point. A larger pullback could last until the 61.8% Fib at $2450 and the line in the sand for a bearish correction is around the channel resistance at $2500, which is close to the 200 SMA dynamic inflection point and the broken short-term rising trend line.

As for technical indicators, the 100 SMA is below the longer-term 200 SMA so the path of least resistance is to the downside. RSI is pointing up to signal that the correction is still in play but is nearing the overbought area to show that sellers might regain the upper hand soon. Stochastic is also heading north so bitcoin could see a few more gains but is also dipping into overbought levels. 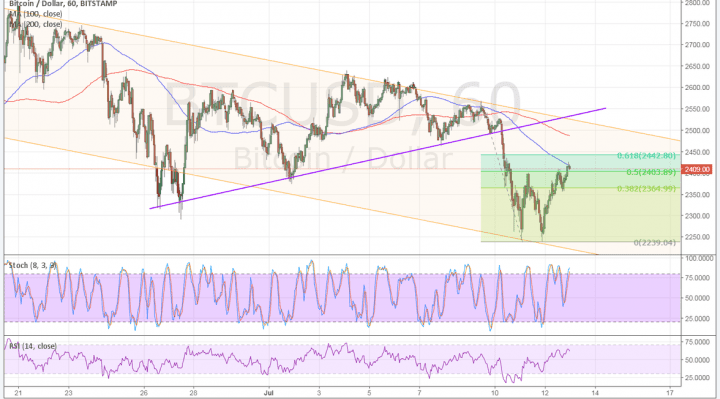 Bitcoin has been weighed down by bearish forecasts yet again, this time from a team of Morgan Stanley analysts. “The ecosystem has focused more on value speculation rather than the foot-leather-eating work of increasing acceptance — way easier to trade speculatively than convince new merchants to accept the cryptocurrency,” wrote analyst James Faucette.

However, the cryptocurrency has managed to keep its head afloat as the dollar has experienced downside pressure itself. In her recent testimony, Yellen gave a relatively balanced assessment and outlook for the US economy, contrary to strong expectations that she would highlight the upside surprise in the June NFP report.

Yellen has another testimony coming up so additional volatility could be in the cards for BTCUSD. Still, more bearish reports could drive speculation again and lead investors to liquidate their holdings in fear that the bubble might burst.