Bitcoin recently breached a support level around the $2300-2350 area to dip close to $1800. A correction could be due from here and applying the Fibonacci retracement tool shows the potential resistance levels.

The 38.2% retracement level is located at $2150 while the 50% level is closer to $2250. A larger pullback could last until $2350, which lines up with the 61.8% Fib, the broken support, and a falling trend line connecting the latest highs of bitcoin action since mid-July. In addition, this is close to the moving averages.

Speaking of moving averages, the 100 SMA is below the longer-term 200 SMA to indicate that the path of least resistance is to the downside. The 100 SMA is around $2400 while the 200 SMA is closer to $2500, which might be the line in the sand for the ongoing drop. A break past $2500 could signal that buyers are regaining control of bitcoin price action. 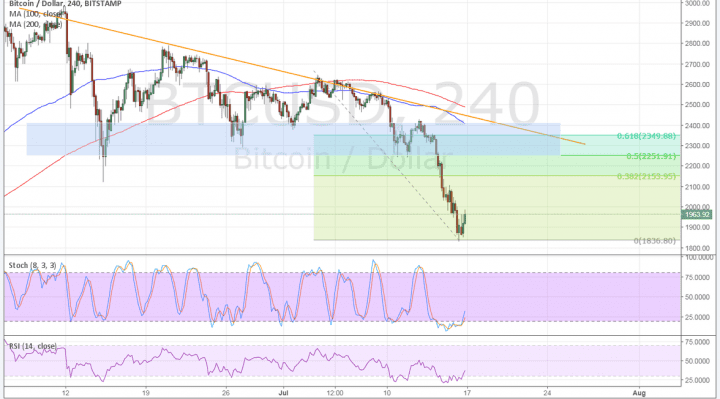 Stochastic is pulling up from the oversold area to indicate that sellers are tired and letting buyers take over. Similarly, RSI is pointing up to signal a return in buying momentum. US reports have come in weaker than expected on Friday and this has dampened rate hike forecasts for September or December, possibly leading to dollar weakness in the days ahead. The next FOMC statement isn’t due until next week.

However, worries about the bitcoin hard fork and crowd mentality owing to the recent selloff has sparked a deeper slide over the weekend. Many fear that the bubble is already bursting as more and more analysts have spoken about the lack of solid fundamentals supporting bitcoin.

Apart from that, the pickup in risk appetite in global financial markets has also drawn investors back to stocks and commodities. Higher-yielding fiat currencies have also been able to take advantage due to stronger tightening expectations. Earlier today, China reported stronger than expected GDP growth for Q2, signaling stronger demand down the line and an extension of risk rallies.