BTCUSD has been rallying so far this week, erasing a large chunk of its declines late last week. However, price seems to be topping out on its rally and technical indicators are showing that the downtrend is ready to resume.

Price is testing resistance close to the top of the descending channel on the 4-hour time frame. If the $2400 level holds as resistance, bitcoin could fall back to the swing low at $1878 or until the channel support closer to the $1750 level and the 76.4% Fib extension. A full extension could mean a drop to the $1564 area.

The 100 SMA is below the longer-term 200 SMA so the path of least resistance is to the downside. This short-term dynamic inflection point is close to the top of the channel and the 200 SMA might be the line in the sand for a pullback. In other words, a break past the 200 SMA dynamic resistance could mark the start of an uptrend. 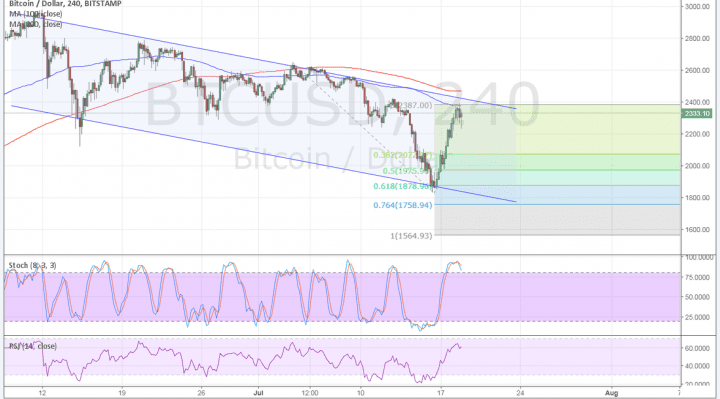 Stochastic is in the overbought region and is turning lower to reflect a potential return in bearish momentum. RSI is still on the move up so there may still be some gains left on the table before sellers take over.

Bitcoin price gains are mostly due to dollar weakness since Friday, as weak CPI and retail sales figures have been piled on by the lack of progress in fiscal reform. All in all, these could mean delays in the Fed’s tightening plan and also potential economic weakness as there’s lower odds of tax cuts and increased infrastructure spending.

Meanwhile, bitcoin has drawn support from reports that miners are making headway in solving potential hard fork issues. At the same time, risk-off flows are keeping cryptocurrencies afloat as traders are once again searching for higher returns in alternative assets outside of stocks and commodities. A pickup in risk appetite, however, could force these non-traditional assets to return their gains as traders move back to safe-haven holdings.