Bitcoin is still moving sideways and completing a reversal formation on its short-term charts. Price has failed in its last two attempts to break past the $2400 resistance, creating a double top pattern with the neckline around $2250.

A break below the neckline support could send bitcoin down by around $150 or the same height as the chart pattern. Stronger selling pressure could take it down to the lows closer to $1800.

The 100 SMA is above the longer-term 200 SMA for now so the path of least resistance is still to the upside. However, a new crossover looks ready to take place and if completed, it could bring more sellers to the mix.

Stochastic is also starting to turn lower to signal a pickup in selling pressure. RSI hasn’t quite reached overbought conditions just yet but is also pointing down so bitcoin might follow suit. 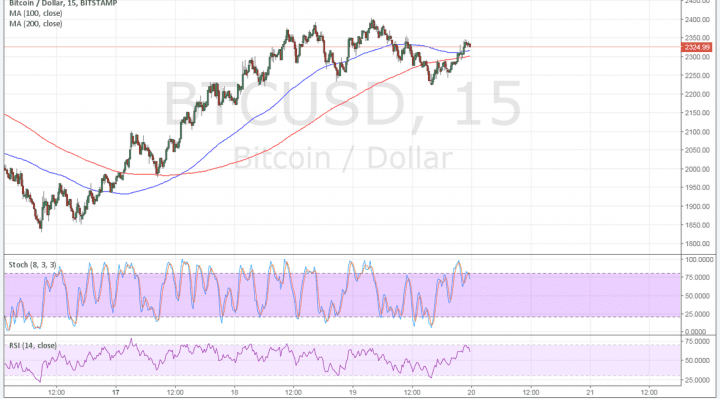 Bitcoin typically advances during times of risk aversion as traders search for higher returns in non-traditional financial markets outside of stocks and commodities. However, the recent return in risk-taking owing to strong data from China and falling crude oil supply has revived demand for higher-yielding assets. Also, the rallies in US stock markets thanks to upbeat quarterly earnings data is also drawing more inflows compared to cryptocurrencies.

There have been reports showing that miners are making progress in terms of addressing potential hard fork issues, and this has shored bitcoin price up for the past few days. However, the rallies also appear to be losing steam as bitcoin is currently testing a major area of interest.

Looking ahead, market sentiment could continue to push bitcoin price around, along with the US dollar. Weakening speculations of a Fed rate hike and tax cuts have dampened demand for the US currency as the Trump administration is encountering several roadblocks in repealing Obamacare. More indications that fiscal reform will be prolonged could further weigh on the dollar’s gains and allow bitcoin to take advantage.