Bitcoin is currently hovering close to its all-time highs, still trying to decide whether to make an upside break or to move back down. A small bullish flag can be seen at the top of its range visible on the 4-hour time frame, and this is often considered a continuation signal.

A break past the flag resistance around the 2800 mark could trigger another test of the 3000 area, and a long green candle above this major psychological resistance could lead to the formation of one record high after another once more. On the other hand, a move below the short-term support at 2750 could signal that a correction is underway.

The 100 SMA is below the longer-term 200 SMA on the 4-hour chart so the path of least resistance is to the downside. In other words, a selloff might be more likely than a break higher. Price could draw support from the area of interest around 2400 near the moving averages dynamic inflection points or at the very bottom of the range closer to 1850. 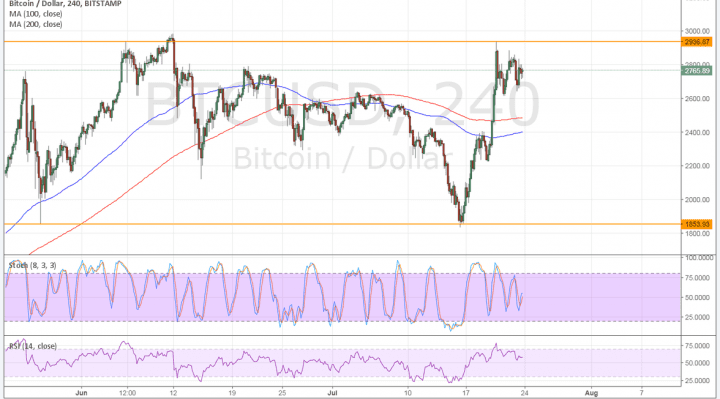 Stochastic seems to be turning higher to indicate the presence of buying pressure, but RSI is on the move down from the overbought zone to signal a return in selling momentum. The former is also on middle ground, signaling further consolidation.

Positive developments in the bitcoin industry pushed the cryptocurrency higher last week after the BIP 91 lock-in marked an important step in the upgrade to SegWit2x. This has been greeted with nearly 80% acceptance from miners in the network, suggesting that the grace period might go by without a glitch. If so, this takes bitcoin a step further in avoiding hard fork issues completely while handling more transactions.

Meanwhile, the dollar is treading carefully ahead of the FOMC decision this week. The minutes of their previous meeting reflected confidence but this could wane as the latest batch of CPI and retail sales figures indicated declines. Brushing these off aside as transitory could renew dollar strength but more cautious comments could dampen September rate hike hopes.