Bitcoin has formed higher lows and found resistance just past the 2800 mark, creating an ascending triangle on its 1-hour time frame. Price is on its way to test the top of the triangle and could be due for another bounce.

The 100 SMA is below the 200 SMA but is attempting an upward crossover to signal that the path of least resistance is to the upside. If this materializes, bullish pressure could kick in and spur more gains for bitcoin. On the other hand, if sellers regain control, another move to the triangle support could happen or perhaps even a break lower.

Stochastic is on the move down to confirm that sellers are still on top of their game. RSI is also turning lower to suggest that bearish momentum could strengthen. Note that triangle spans 2300 to 2800 so the resulting break could be of the same size, either taking bitcoin to 3300 or to 1800. 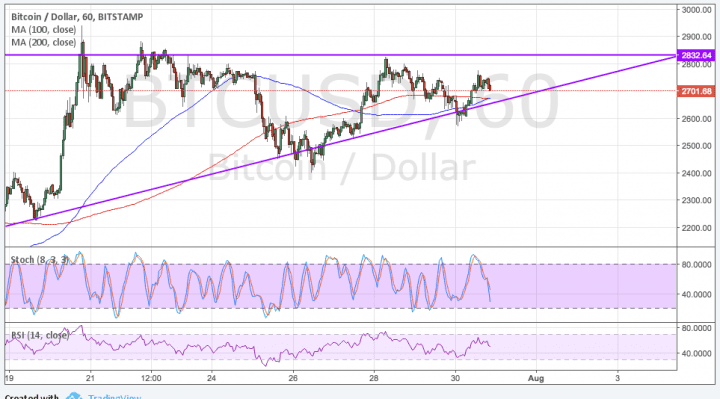 Traders are currently waiting for the outcome of the August 1 shift to a consensus version of the bitcoin software to avoid a hard fork. The other week, sentiment strengthened when BIP 91 was locked in since this would pave the way for a shift to SegWit. However, the emergence of rival factions revived doubts that the merge would occur and even prompted exchanges to issue warnings to their clients regarding bitcoin deposits and potential incompatibilities.

Meanwhile, the dollar has drawn more support upon seeing stronger than expected US advanced GDP. The economy chalked up a 2.6% growth figure for Q2 versus the projected 2.4% expansion and the earlier 1.4% reading. This underscores the Fed’s assessment that the slowdown in Q1 was temporary and that they could be on track towards tightening in September or December.

Looking ahead, the July NFP release later this week could seal the deal for dollar action as this would shape Fed rate hike expectations for September and the timing of the balance sheet runoff. The FOMC sounded cautious in their statement last week but might renew their hawkishness if they see strong data.