Bitcoin has broken out of its symmetrical triangle consolidation pattern, with the bullish breakout signaling that further gains are in the cards. Price is currently testing the dynamic inflection points at the moving averages and breaking past these levels could draw more buyers to the mix.

The 100 SMA is below the longer-term 200 SMA, though, so the path of least resistance is to the downside. Still, the gap between the moving averages is pretty close so a crossover could be due anytime soon.

Stochastic looks ready to head south, however, so bitcoin price might follow suit. RSI is still on the move up to indicate that there’s some buying pressure in play, but reaching the overbought zone and turning lower could lead to a selloff. In that case, the upside break could prove to be a fake out and bears could regain control at some point.

Note that the chart formation is from 2100 to 2950 so the resulting breakout could last by the same height. Bitcoin price could at least test the resistance at 2700 on a break higher before moving on towards the all-time highs just shy of 3000.00. To the downside, bitcoin could test the triangle lows at 2100 then go for the next psychological support at 2000 on its move lower. 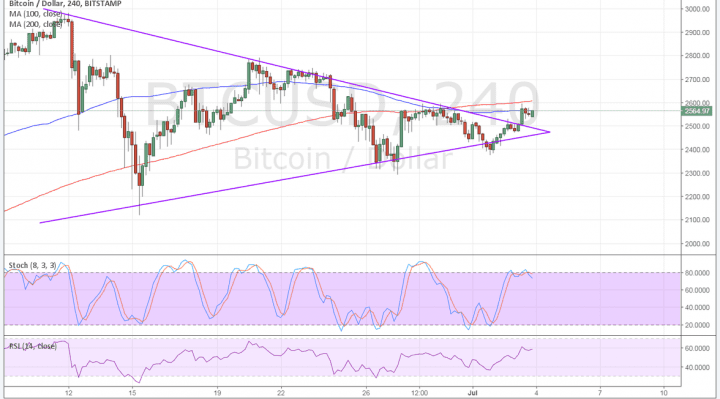 Dollar strength kicked into high gear after the US ISM manufacturing PMI beat expectations and signaled a possible upside NFP surprise for June. The components for new orders and production ticked higher as well, hinting at stronger business activity down the line and possibly further gains in hiring.

Bitcoin price also got a boost from bullish remarks by Sheba Jafari, the Goldman Sachs analyst that previously wrote of a potential selloff for the cryptocurrency. According to Jafari, bitcoin is in its fifth wave of gains that might extend all the way up to 3915. This amounts to roughly a 50% gain at current prices, and the potential return attracted more buyers again.