Bitcoin continues to trend higher against the dollar but is in the middle of a correction from its recent rally. Using the Fib tool on the swing low and high on the 1-hour chart shows potential support levels.

Price is nearing the 38.2% retracement level at $2540 and a bounce could take it back up to the swing high or until the channel resistance closer to $2700. A larger pullback could last until the 50% Fib, which coincides with the moving averages that typically hold as dynamic inflection points. Meanwhile, the 61.8% level lines up with the channel support at $2480 and an area of interest as well.

The 100 SMA is crossing above the longer-term 200 SMA to confirm that the path of least resistance is to the upside. In other words, the uptrend is more likely to continue than to reverse. The line in the sand for a pullback might be the $2450 mark, as a break below this region could mean that bears are regaining the upper hand. 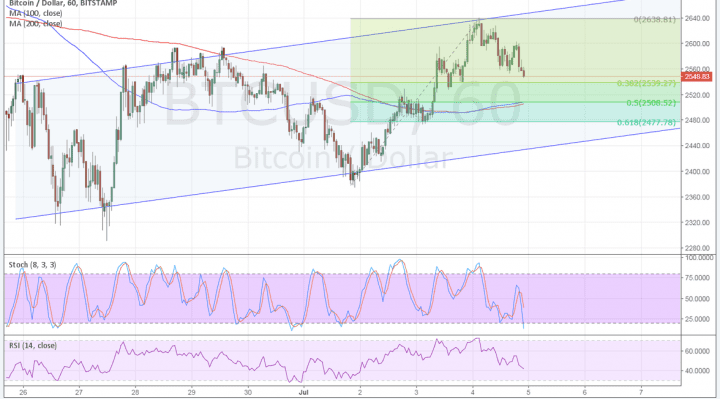 Stochastic is still pointing down, which means that there’s some selling pressure left. Similarly, RSI is heading lower so bitcoin might follow suit. Once both oscillators hit the oversold levels and turn higher, buying momentum could return. If bulls are strong enough, they could even push for an upside break of the channel resistance and start a steeper climb for bitcoin.

Goldman Sachs analyst Sheba Jafari recently gave bullish forecasts for bitcoin, and many say that this was responsible for the cryptocurrency’s rally at the start of the quarter. Of course it remains to be seen whether it can be sustained by market factors or if the speculation could fade soon.

As for the dollar, the main event risk this week is the NFP release which might set the tone for the Fed’s policy bias in the second half of this year. Many are hoping to see another rate hike in September but this could be pushed back later to December to give way to the central bank’s balance sheet unwinding.