Bitcoin made another push higher in recent trading sessions but is currently stalling at the strong area of interest at $2600. This is in the middle of its long-term symmetrical triangle formation and holding as resistance could send it back down to support for a potential break lower.

On the other hand, a move past this area could lead to another test of resistance or a break higher. The 100 SMA is below the longer-term 200 SMA, though, so the path of least resistance is to the downside. Also, these moving averages coincide with the area of interest and are holding as dynamic inflection points.

Stochastic is still pointing up to signal that there’s some buying pressure left for another move higher but this oscillator is already approaching the overbought level. RSI is already turning lower to indicate a return in selling pressure. Note that the triangle spans $2200 to $2900 so any resulting breakout could last by $700. 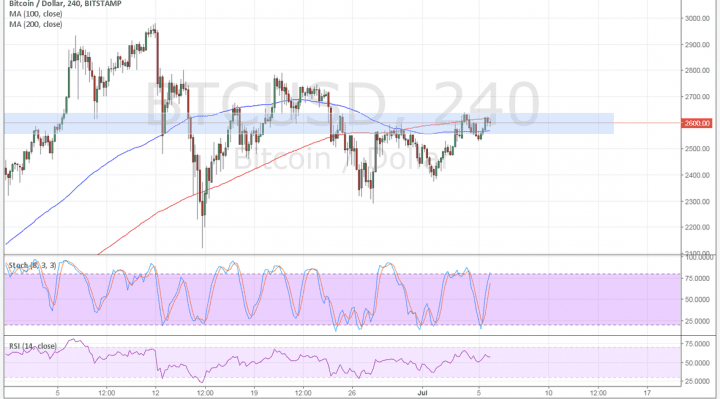 Dollar demand has weakened after the release of the FOMC minutes as policymakers seemed divided on their tightening time line and also on their plans to start balance sheet reinvestment. Some wanted to start in a couple of months while others preferred to wait until later in the year or early next year.

FOMC member Kashkari once again dissented the June hike, citing concerns that the dip in inflation might not be temporary. Other policymakers also started to express doubts that the pickup in employment would be enough to sustain gains in wages and price levels, so market watchers will turn their attention to Friday’s NFP release next.

An increase of 175K in hiring is eyed and wages are still expected to be subdued. However, the ISM manufacturing PMI indicated a strong jump in its employment component so there’s room for an upside surprise. A higher reading than 200K could shore up September rate hike expectations and allow the dollar to recover against bitcoin price while a weak read below 150K could allow bitcoin to gain the upper hand.