Bitcoin bulls seem to be charging once more, gaining some ground after a brief bounce off a nearby resistance area. Applying the Fib extension tool reveals how high BTCUSD can climb from here.

Price bounced off the channel support and 200 SMA dynamic inflection point around $2200 and is setting its sights on the channel resistance around the $3200 mark. However, bitcoin could hit a ceiling at the all-time highs around $3000 at which profit-taking could happen.

The 100 SMA is safely above the longer-term 200 SMA so the path of least resistance is to the upside. However, the gap between the moving averages seems to be narrowing so a downward crossover could happen and draw more bears to the mix.

If that happens, another test of the channel support could take place. Stochastic is already dipping into overbought territory to reflect bullish exhaustion while RSI is also closing in on the overbought area as well. Once both oscillators turn lower, bitcoin might follow suit. 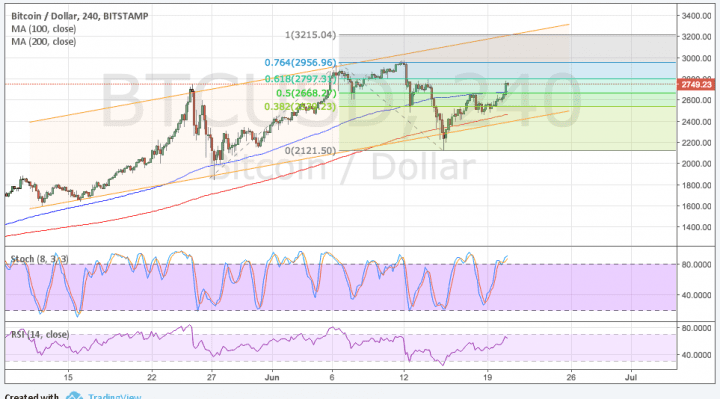 Still, it’s worth noting that India is being reported to accept bitcoin as a legal form of payment soon. If that happens, it could spur bitcoin price action just like when the Japanese government made a similar announcement earlier in the year. At that time, the boost to legitimacy led to a surge in trading volumes worldwide.

India is a pretty huge market for bitcoin as the cryptocurrency gained popularity when the government demonetized large notes a few months back. It also houses a large population that could show more interest in bitcoin payments and applications.

Meanwhile, the dollar is returning some of its recent wins after other Fed policymakers didn’t express such a hawkish tone. This once again cast some doubt on tightening forecasts for the rest of the year and traders didn’t seem to be buying the Trump administration’s push for fiscal reform as well.

Apart from that, the presence of risks from Brexit talks in Europe are also encouraging traders to seek returns in non-traditional markets like cryptocurrencies.