Bitcoin has broken below its support areas noted in the previous article to establish that a downtrend may be underway. Price has also formed a head and shoulder pattern on the 1-hour chart, which is a classic reversal signal.

BTCUSD has yet to break below the neckline around the 2500 level before confirming that a longer-term selloff is in the cards. Also, the 100 SMA is still above the longer-term 200 SMA for now so the path of least resistance may be to the upside. A downward crossover is looming to signal that selling pressure could return.

In that case, a move below the 2500 support area could send bitcoin down by around 300 points, which is roughly the same height as the reversal chart pattern. On the other hand, if support holds, another bounce back to the 2800 highs or the 3000 level could happen, although it would take another major catalyst to make that happen. 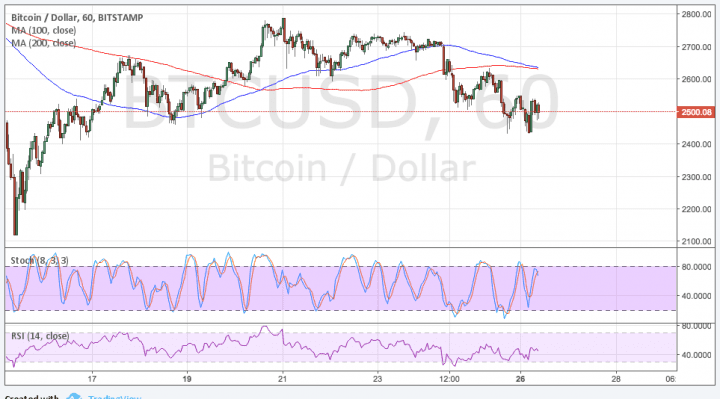 Stochastic is pointing up to signal that there’s still some bullish momentum left for more gains. However, a downward crossover also appears to be taking place, possibly sending the oscillator back down before it hits the overbought region.

RSI is on middle ground on the way up to show that buyers could still put up a fight. If so, bitcoin could make a pullback to at least the nearby area of interest at 2600. This is also close to the moving averages, which might hold as dynamic resistance levels.

There’s not much in the way of top-tier data from the US, although it’s worth noting that the durable goods orders data fell short of consensus. Also, Fed head Yellen has a testimony coming up and any words of caution could mean weakness for the dollar against bitcoin. Of course strongly hawkish remarks could spur more gains for the US currency.

Bitcoin has struggled to keep up its climb amid renewed skepticism on cryptocurrencies. This stems from a couple of big names warning that bitcoin could be due for losses and the flash crash in ethereum, which led some investors to liquidate their bitcoin holdings as well.