Bitcoin is flashing major signs that it’s tired from the climb, creating a head and shoulders pattern visible on its 4-hour time frame. Price is still in the process of completing its right shoulder and is on its way to test the neckline around the $2300 level.

A break below the neckline support could yield around $700 in losses as this is the height of the head and shoulders pattern. The 100 SMA is attempting to cross below the longer-term 200 SMA to confirm a pickup in selling momentum. However, if price still bounces off $2300, these moving averages could hold as dynamic resistance levels.

Stochastic is still pointing down to confirm that bearish pressure is in play. RSI is also heading south so bitcoin could follow suit. Note, though, that both oscillators are already dipping into oversold levels to indicate that sellers may be feeling tired. In that case, buyers could take advantage and lead to a bounce. 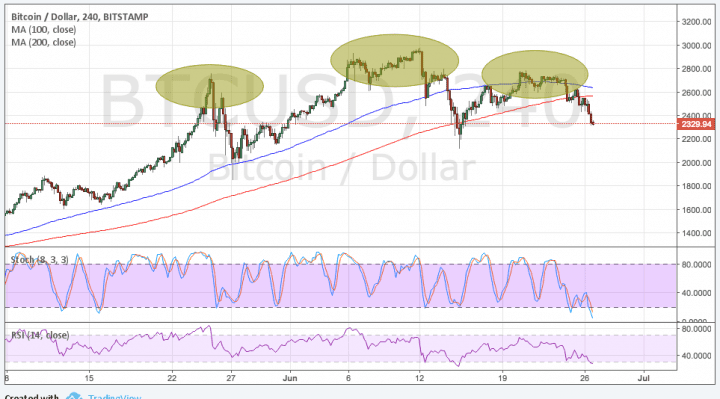 The end of the month and quarter is fast-approaching so there are plenty of opportunities for profit-taking. Keep in mind that bitcoin price has achieved new all-time highs in June so bulls might be keen on cashing in on these gains so far.

Besides, there has been a lot of doubt that bitcoin could sustain the climb past the $3000 mark as many have been warning that it is in a bubble. Apart from that, the ethereum flash crash also raised some concerns about cryptocurrencies, following outages in a couple of bitcoin exchanges due to unprecedented levels of traffic earlier on.

As for the dollar, the Fed’s confirmation that it intends to hike rates one more time before the year ends and to start unwinding its balance sheet holdings has been positive for the US currency. Data has yet to support these views, but Fed Chairperson Yellen has a speech coming up and she might give more words of reassurance that could boost USD against bitcoin price.