BTCUSD has calmed down from its volatile run late last ween and is stuck in a small rising wedge formation. Price is also within its range, with support at the $1120 level and resistance at $1280.

The 100 SMA is below the longer-term 200 SMA, which means that the path of least resistance is to the downside. However, the gap between the moving averages is narrowing so an upward crossover could be in the cards. In that case, price could break out of its wedge and go for a test of resistance. If buying pressure is strong enough, a break past the $1280 mark and set off a sharper climb for bitcoin.

Keep in mind, however, that RSI is on the move down, which means that bearish pressure is in play. This could still allow a break below the wedge pattern and a move towards the support at $1120. Stochastic is also moving south so bitcoin price could follow suit. 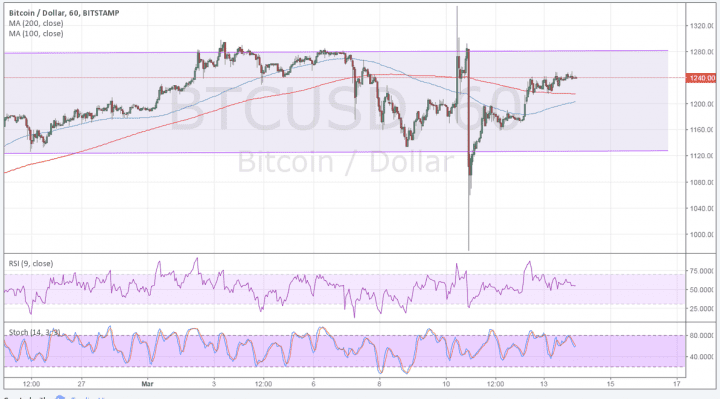 Volatility is expected to pick up again towards the middle of the week as the FOMC statement comes along. This particular announcement comes with a press conference and revised Fed forecasts, so these should provide a guide on whether or not the central bank can stay in line with its plan to hike interest rates three times this year. Cautious remarks could mean losses for the dollar while hawkish rhetoric could mean a strong USD rally.

Apart from that, other central banks are scheduled to make their monetary policy decisions this week and their biases could also shape overall market sentiment, which in turn affects bitcoin price. Generally speaking, a pickup in risk aversion has been able to benefit bitcoin price as investors try to seek higher returns outside of traditional financial markets like stocks, commodities, or currencies.

Uncertainties in the European region are still present, with the UK government gearing up to invoke Article 50 later this month and the Scottish government pushing for another independence referendum. French election updates are also influencing overall market sentiment as a rising lead by Le Pen could revive fears of a “Frexit” and instability in the region.

Zooming out to longer-term time frames of bitcoin shows that the overall uptrend remains intact and that price is testing a major support zone. This could be the make-or-break point for the trend, as a move below the $1100 region could open the door for a drop to the next psychological level at $1000. On the other hand, if support holds, price could eventually make its way up to the highs at $1300 and beyond.

Note, however, that bitcoin investors are still reeling from the SEC denial of the COIN bitcoin ETF. The agency said that one of their grounds for rejection was that bitcoin is traded in several markets, most of which are unregulated, thereby increasing risk for fraud and manipulation. Still, the Winklevoss twins said that they would continue to work with the regulator to get the ETF approved later on.