BTCUSD is trending higher on its short-term time frames, moving inside an ascending channel on its 15-minute chart. Price is currently hovering at support and could be due for a bounce, although technical indicators are giving mixed signals.

The 100 SMA is above the longer-term 200 SMA so the path of least resistance is to the upside. This means that price could bounce up to the channel resistance at the $1125 area instead of breaking down. A move below support could still find a floor at the dynamic inflection point at the 200 SMA near $1020.

Stochastic is already indicating overbought conditions, which means that BTCUSD bulls are already tired. RSI is moving up but is also in overbought territory and turning lower could draw more sellers to the mix. In that case, bearish momentum could pick up and spur a selloff for BTCUSD. 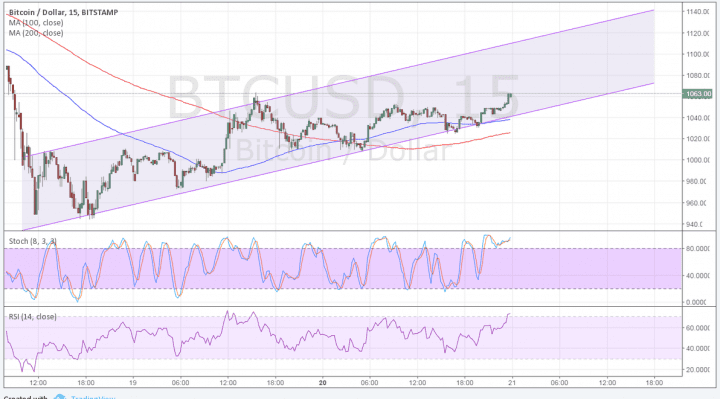 A break below the channel support could bring bitcoin price down to the support at $950 or lower. On the longer-term time frames, it can be seen that bitcoin broke below a long-term ascending trend line, which means that a reversal from the uptrend is due. However, price is still in correction mode on those time frames and the area of interest lines up with this short-term channel resistance.

Dollar demand is ramping up once more as a couple of formerly dovish Fed members acknowledged the improvements in the US economy and confirmed that three rate hikes are possible this year. Still, FOMC member Kashkari, who dissented from hiking this month, said that he’d vote for tightening if inflation reaches the 2% target.

There are no other major reports lined up from the US economy this week so the focus could shift to monetary policy, which is positive for the dollar against bitcoin. The cryptocurrency is still being bogged down by the prospect of stricter regulation in China and fears of more restrictions in the market. Apart from that, the hard fork debate is also discouraging investors from putting more money in bitcoin.

Geopolitical risks in the European region brought forth by the French elections and Brexit negotiations could still lend some support for BTCUSD as bitcoin usually advances when global risks rise and investors seek higher returns outside of equities and currencies. In recent events, PM May confirmed that they would invoke Article 50 by March 29 to officially kick off the negotiations process. Rising tensions for both parties could keep uncertainty on the table, which would send jitters across the global economy and boost demand for bitcoin as a store of value and alternative investment.