Bitcoin continues to trend higher and is moving above a rising trend line on the 4-hour chart. Price just recently formed a bullish flag consolidation pattern and broke to the upside, signaling that buying pressure has gotten stronger. This also suggests that bitcoin might not pull back to the trend line support before heading further north.

The 100 SMA is above the longer-term 200 SMA on this time frame, confirming that the path of least resistance is to the upside. In other words, the rally is more likely to continue than to reverse. Also, the gap between the moving averages is getting wider to indicate stronger buying momentum. The 100 SMA is near the trend line support as well, adding to its strength as a potential floor in the event of a correction.

RSI is on the move down to indicate that bearish pressure is present. This could be enough to take bitcoin back down to support at 1400, especially since price hasn’t formed new highs just yet. But when the oscillator hits the oversold region and turns higher, buying pressure could come back in play.

Stochastic is on middle ground but appears to be turning back up to show that buyers are trying to regain control of price action. If this pushes through, bitcoin could break past its recent record highs and create new ones past 1620. 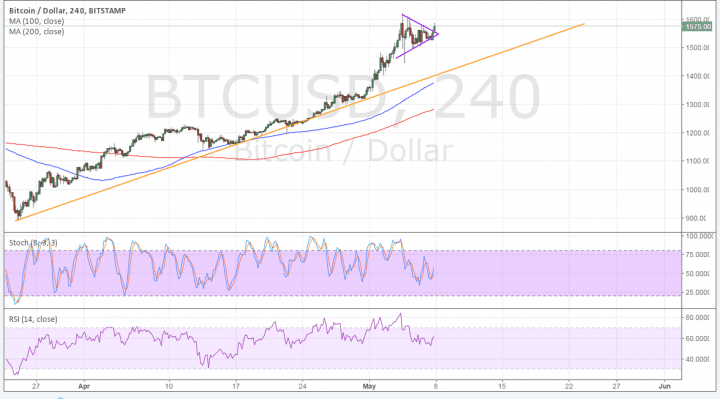 Economic data from the US turned out stronger than expected as Friday’s NFP report showed that hiring increased by 211K versus the projected 194K gain while the jobless rate improved to 4.5% and earnings came in line with expectations of a 0.3% uptick. This led to a bit of upside for the dollar against bitcoin towards the end of the week as strong data supported a rate hike for June.

However, support for bitcoin remains just as strong as investors are keeping their fingers crossed for SEC approval for the COIN bitcoin ETF. Recall that the regulator gave the Winklevoss twins a chance to submit more requirements and that approval would mean higher market interest and liquidity. Bitcoin is already enjoying stronger volumes in Japan as the government’s decision to officially accept bitcoin as a legal form of payment drove volumes higher.