Bitcoin staged yet another strong rally but could be due for some profit-taking as it tests a major resistance area. Besides, profit-taking could come into play at the end of the month and ahead of the hard fork.

Price is safely inside its ascending channel pattern on the 4-hour time frame, which means that the uptrend is intact. However, bitcoin is at the very top around $6400 and might need to correct to the support at $6000 or the mid-channel area of interest at $6200 before heading further north.

The 100 SMA is above the longer-term 200 SMA so the path of least resistance is to the upside. In other words, the rally is more likely to continue than to reverse. Stronger bullish pressure could even lead to a break past the resistance and a steeper climb. 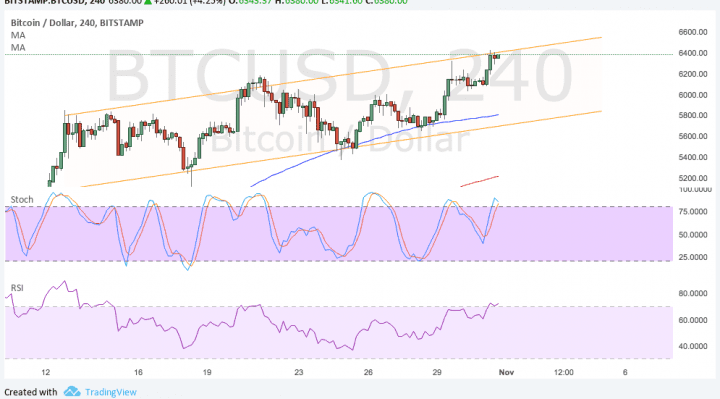 Stochastic is already indicating overbought conditions and might be due to turn lower. This means that bitcoin bulls could be feeling exhausted and ready to let sellers take over. RSI is on the move up but also nearing overbought levels to reflect a potential turnaround.

Reports that CME Group decided to open bitcoin futures trading allowed the cryptocurrency’s price to skyrocket as this would mean stronger investor interest and volumes. Of course this is pending regulatory approval from the CFTC but the group anticipates that it would be completed by the end of this year.

“Given increasing client interest in the evolving cryptocurrency markets, we have decided to introduce a bitcoin futures contract,” Terry Duffy, CME Group chairman and CEO, said in a press release. “As the world’s largest regulated marketplace, CME Group is the natural home for this new vehicle that will provide investors with transparency, price discovery and risk transfer capabilities.”

Meanwhile, the dollar faces event risks such as the FOMC decision, NFP release, and the announcement of the next Fed Chairperson by Trump – most of which are foreseen to have a bearish impact on the currency.