Bitcoin appears to be having trouble sustaining its surge after news of the hard fork suspension broke out. Price is back to its previous levels and is forming a double top pattern on the 1-hour time frame, signaling that a reversal is due.

Bitcoin has yet to test the neckline around $6800 before confirming the potential selloff. The chart pattern is approximately $1000 tall so the resulting selloff could last by the same size.

The 100 SMA is starting to cross below the longer-term 200 SMA to signal a pickup in bearish pressure. Stochastic is still on the move up to show that there may still be some bullish momentum left while RSI is treading on middle ground to signal consolidation. 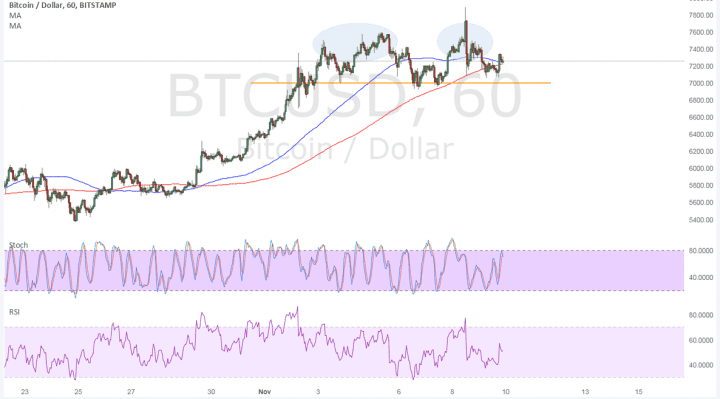 Bitcoin popped higher earlier in the week on reports that the proponents of SegWit2x decided to suspend the upgrade as the community has been divided on how to tackle the issue. They noted in their email that this isn’t the goal of bitcoin and that they will look into other solutions for the time being.

While this lifted the cloud of uncertainty lingering over the cryptocurrency, it also leaves it with no additional capacity to benefit from. Besides, the hard fork issue is likely to come up again in the near future and developers will be hard-pressed to come up with a fix just the same.

As for the dollar, it is under pressure on setbacks to tax reform and the lower likelihood of getting anything done before the end of this year. Data has been mostly positive though, keeping a Fed December hike in play, but the change in central bank leadership also poses a lot of uncertainties for tightening plans next year.

Rising volumes from South Korea and Japan continue to keep bitcoin propped up for the time being, but any issues that arise from the lack of network upgrades could weigh on investor sentiment.