Bitcoin is making a much-needed pullback from its climb since October, and it is currently testing nearby support areas. Price is bouncing off the 38.2% Fibonacci retracement level on the 4-hour time frame and could be ready to head back to the swing high.

This Fib lines up with a short-term resistance level around $6000, which could contain a lot of buy orders. This is also in line with the 200 SMA dynamic support.

The 100 SMA is above the longer-term 200 SMA so the path of least resistance is to the upside. This means that the uptrend is more likely to resume than to reverse. However, price is also moving below the 200 SMA dynamic support to signal strengthening bearish pressure.

A larger pullback could last until the 61.8% Fibonacci retracement level at $4900, which is close to the ascending trend line support that’s been holding since mid-August. The 50% Fib might provide some support as well.

Stochastic is already pulling up from the oversold area to signal that bulls are ready to push bitcoin price back up. A strong surge in bullish pressure could lead to a move past the swing high and $8000 handle. RSI is also climbing out of the oversold region to signal a pickup in bullish momentum. 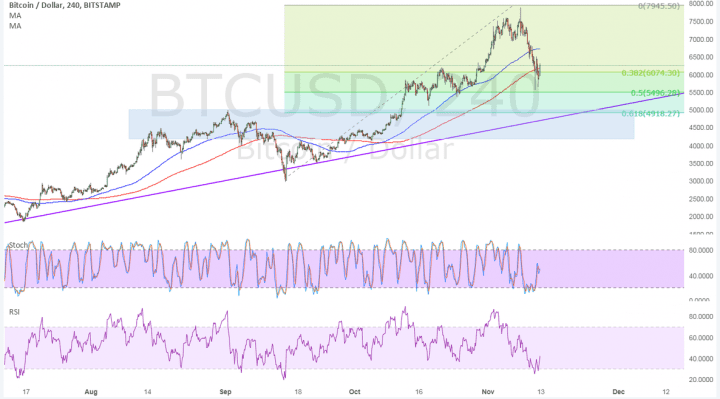 Bitcoin initially drew support from news of the hard fork suspension but the cryptocurrency sold off as traders realized that this dilemma would come up again soon. This could mean more uncertainty in the next few months as proponents try to find a different approach but this would keep the network’s capacity limited for the time being.

The dollar is also under some weight due to uncertainties about the tax plan. The versions of the House and the Senate have huge differences that might not be so easily resolved, which means that it’s unlikely to get passed before the end of the year.