Bitcoin looks ready to resume to its climb as a double bottom classic reversal pattern formed on its 1-hour time frame. These bottoms occurred at the area of interest visible on longer-term time frames.

Price has already broken past the neckline around $6400 and has since pulled back for a retest. Bitcoin looks ready to resume its climb from here but technical indicators are reflecting the presence of bearish pressure.

For one, the 100 SMA is below the 200 SMA so the path of least resistance is to the downside. This means that the selloff is still likely to resume at some point, probably when price tests the 200 SMA dynamic inflection point. Also, the gap between the moving averages is widening to reflect stronger selling momentum.

Stochastic is moving up but is closing in on the overbought zone to signal exhaustion among buyers. RSI appears to be turning down already so bitcoin price might follow suit and revisit the lows at $5600. 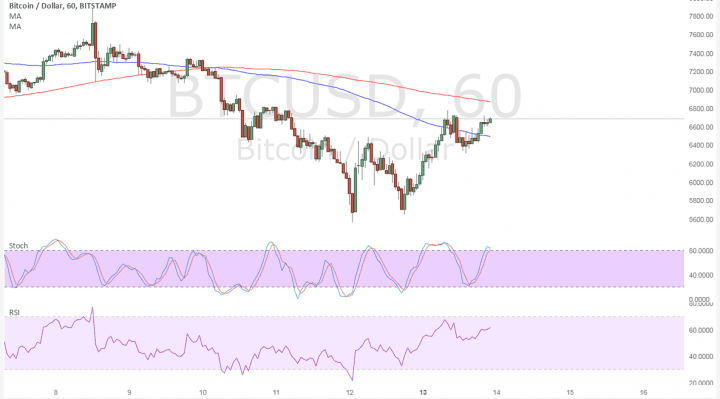 Rival bitcoin gold is already live after what many said was a rocky launch. However, this could still pose a threat to the original core version especially since the network upgrade was suspended on account of division in the community.

Meanwhile, the dollar is set to take its cues from tax reform updates for the most part of the week. Investors still seem hopeful that lawmakers can come together and achieve some progress this week. Take note, however, that the versions of the House and Senate contain stark differences that may take a while to resolve. In any case, the House is scheduled to vote on their version of the bill on Thursday and any delays could mean dollar weakness.

US CPI and retail sales figures are also up for release this week, and traders aren’t really expecting any major surprises. Consumer spending is projected to slow on account of weaker hiring gains and wage growth over the past couple of months, which could be dollar bearish also.