Bitcoin has recently broken below an ascending trend line connecting the lows since mid-October and has since pulled up for a retest. The broken trend line coincides with the 50% Fibonacci retracement level at the $6800 area that appears to be keeping gains in check.

A larger correction could make it all the way up to the 61.8% Fibonacci retracement level at $7033, which lines up with the neckline of a short-term double top. A move past this area of interest could lead to a test of the record highs or the creation of new ones.

The 100 SMA is still above the longer-term 200 SMA so the path of least resistance is to the upside, which suggests that the uptrend could still resume. However, the gap between the moving averages is narrowing to reflect weakening bullish momentum.

Stochastic is turning lower from overbought levels to signal a return in selling pressure as well. In that case, bitcoin could make it down to the swing low at $5600. RSI, on the other hand, is still on the move up so there may be some buying pressure left in play. 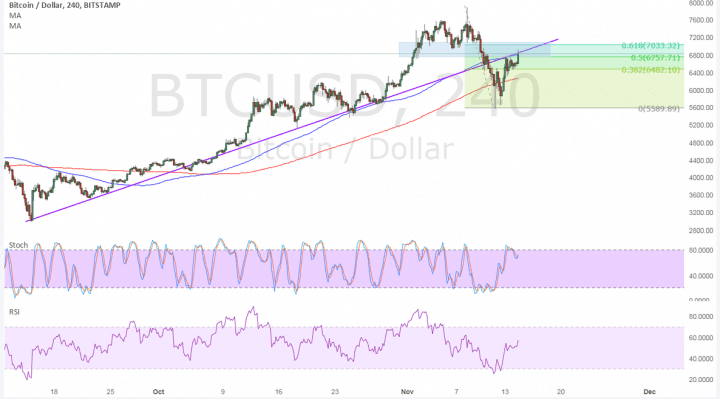 Bitcoin has rebounded from its selloff following news of the hard fork suspension. For one, the launch of rival version bitcoin gold has been less impressive than expected and network acceptance remains very low. This could still leave the core version as the dominant one, similar to the turnout with bitcoin cash a few months back.

The dollar is also feeling the weight of slow progress in tax reform as a new set of challenges threatens to delay any approval further. The House is scheduled to vote on their version this week but could still postpone it if there’s not enough support. Meanwhile, Senator Paul Rand shared plans to abolish the Obamacare provision pertaining to individual mandate in connection with tax legislation, which deals more complications in unifying their version with the House.