Bitcoin is back to testing its record highs and might even go for new ones. Bulls could still have a chance to catch the climb on a pullback to a short-term ascending trend line visible on the 1-hour time frame.

This support level is located around the $7600 area but a larger correction could still reach $7200-7400. The 100 SMA has crossed above the longer-term 200 SMA to signal that the path of least resistance is to the upside. In other words, the uptrend is more likely to carry on than to reverse.

Stochastic is heading down from the overbought zone, however, indicating that buyers are feeling exhausted and willing to let sellers take over for the time being. RSI is just making its way lower and could mean that selling pressure could stay in play for a bit longer.

The moving averages could serve as the line in the sand for the uptrend as a break below these dynamic inflection points could mean more losses for bitcoin. Profit-taking is likely to happen at the recent highs as the weekend approaches, but a break past these levels could pave the way for a steeper climb. 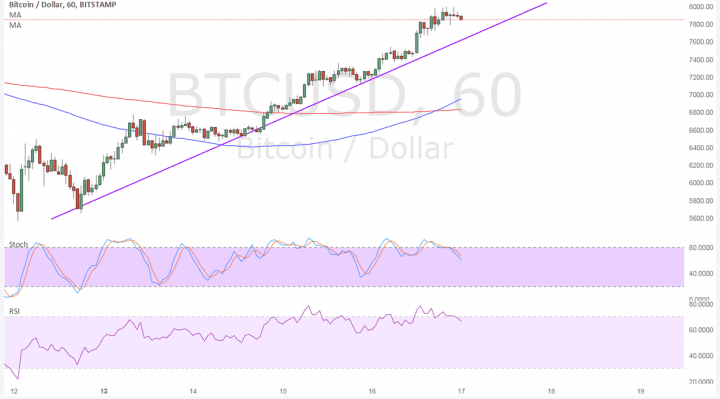 Network acceptance for rival versions bitcoin cash and bitcoin gold continue to slide, something that the core version has been able to benefit from. Take note that this is happening despite the hard fork suspension that would reportedly boost the capacity of the bitcoin core network to handle much more transactions than usual. Bitcoin cash has been down more than 25% in under 48 hours

Rising investor volumes are also being touted as one of the major factors spurring the recent rallies. According to CoinMarketCap.com, cryptocurrency markets have seen in excess of $10 billion in trading volume in the past 24 hours. Despite the shutdown of bitcoin exchanges in China, demand from Japan and South Korea has more than made up for the dip in activity. Positive expectations for CME bitcoin futures are also propping price up.