Bitcoin is currently in correction mode as traders must be reducing their holdings ahead of next week’s network upgrade. Several exchanges have already announced temporarily halting withdrawals around the event, so it’s understandable how profits are being booked from the recent rally.

The 100 SMA is safely above the longer-term 200 SMA on the 4-hour time frame to indicate that the path of least resistance is to the upside. This signals that the uptrend is more likely to resume than to reverse. The 100 SMA dynamic inflection point lines up with the rising trend line that’s been connecting the lows since mid-September.

Stochastic is heading lower, however, so sellers are in control for now. RSI has room to head down also, so the correction could continue from here. Buying pressure could return once both oscillators reach oversold levels and turn back up. There’s an area of interest around $5800-6000 and the 200 SMA dynamic inflection point as well. 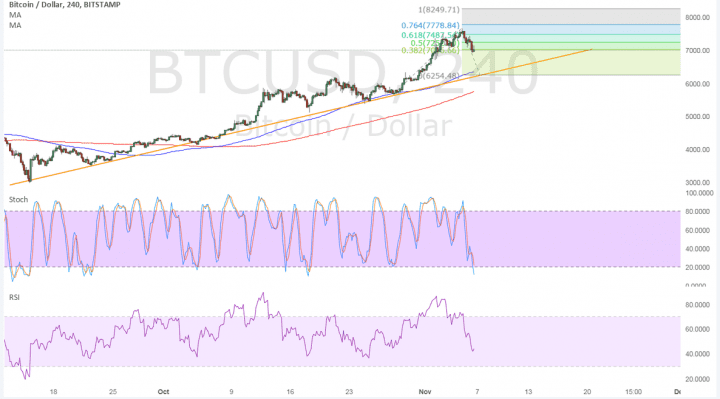 The network upgrade is scheduled on November 16 so investors could keep reducing their risk ahead of the event. Many expect this to turn out the same way as the August upgrade, in which bitcoin was able to handle more transactions than before and was able to smoke out its competition bitcoin cash.

This time, rival bitcoin gold has already been launched and traders are keeping close tabs on network acceptance. This version is said to reduce the costs associated with mining and could provide a more viable and less expensive alternative to the core version. But if the network continues to strongly favor the original version, bitcoin price could see a new set of record highs in no time.