Bitcoin underwent a burst of volatility and popped higher upon seeing news of a suspension in the hard fork. This event was posing a lot of uncertainty for the industry, although the mood was overall positive.

Price topped around $7900 before retreating as traders quickly booked profits. Price dipped back to the channel support at $7200 before showing signs of resuming its climb.

This ascending channel has been on hold so far this month and might continue to keep bitcoin on its climb. If the channel support continues to keep losses in check, bitcoin could head back to the recent highs or higher.

The 100 SMA is above the longer-term 200 SMA so the path of least resistance is to the upside. The 200 SMA also lines up with the bottom of the channel to add to its strength as a floor. However, the gap between the moving averages is narrowing to signal weakening bullish pressure.

RSI is on the move up to show that bullish pressure is returning even without reaching oversold levels. Stochastic is also on the move up so bitcoin might follow suit. 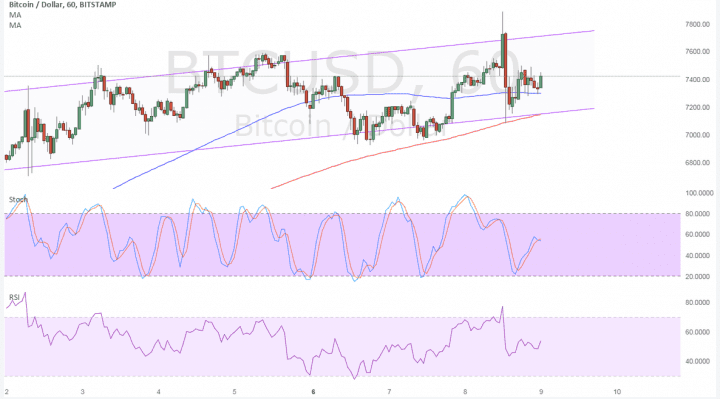 According to the email from proponents of SegWit2x:

Although we strongly believe in the need for a larger blocksize, there is something we
believe is even more important: keeping the community together. Unfortunately, it is clear that we have not built sufficient consensus for a clean blocksize upgrade at this time. Continuing on the current path could divide the community and be a setback to Bitcoin’s growth. This was never the goal of Segwit2x.

Their message still clarified that they foresee capacity increases down the line and they hope that the community can come together by that time to find a solution.

Meanwhile, the dollar is under pressure on setbacks to the tax reform plan. Congress is set to vote on their version of the bill next week but Senate is getting ready to release their own version today. Stark differences between the two could mean more delays in implementation, which could keep a lid on dollar gains.