Bitcoin is slowly moving higher, trading inside an ascending channel on the 4-hour time frame and above a rising trend line on the 1-hour time frame. Price is still aiming for the top of the range around $5000 as it has moved past the mid-channel area of interest.

The 100 SMA is still above the longer-term 200 SMA so the path of least resistance is to the upside. This means that the uptrend is more likely to continue than to reverse. The short-term moving average coincides with the channel support at $4500, which suggests that this level could hold as a floor in the event of a break below the short-term trend line.

Stochastic is already indicating overbought conditions, which means that buyers are feeling exhausted and could let sellers take over from here. RSI is also in the overbought level to indicate rally exhaustion as well. Both oscillators have yet to move below overbought levels to show a return in selling momentum. 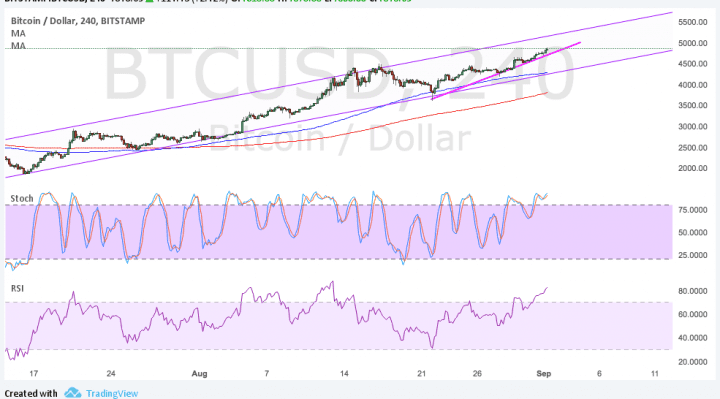 Dollar demand took a hit when the NFP report turned out weaker than expected at 156K versus the projected 180K figure. To top it off, the earlier reading was downgraded to 189K. This dragged down Fed rate hike expectations for the coming months, weighing on the US currency as well and allowing bitcoin to take advantage.

Bitcoin has been taking out one record high after another in the past few days while cryptocurrencies are being boosted by geopolitical risk. During these cases, investors typically look for higher returns in alternative assets outside of stocks and commodities.

This marks a stellar start for bitcoin in September and could be ominous of how the digital asset could fare until the end of the year. Note that volatility and trading activity typically pick up during this time of the year as the summer months are over.